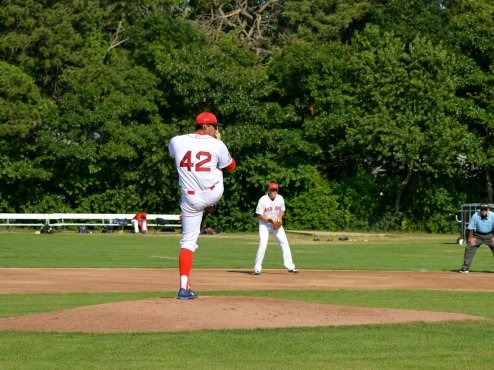 The Braves could get nothing going all game, thanks to a great start by the all-star Jacome. He allowed no runs on only two hits, and struck out four in six innings of work. Parker Bugg (LSU) followed suit, allowing only one base runner in two scoreless innings. Kourtis struck out two in a scoreless ninth inning to secure the victory for the Sox.

Y-D used two high-scoring innings to put the game out of reach for the Braves. The Red Sox had four runs in the second inning to give Jacome some breathing room early on in the ballgame. All-stars Jordan Tarsovich (VMI) and Andrew Stevenson (LSU) both had RBI-singles in the inning, and Josh Lester (Missouri) drove in two runs on a double to right field.

Bourne starting pitcher Jimmy Herget (USF) continued to struggle with the Red Sox lineup in the fourth inning, allowing three runs to put the Braves in a 7-0 hole. Tarsovich got his second RBI of the game when he singled home Stevenson with two-outs. TJ Wharton (Catawba College) had two RBIs of his own on a single that scored Tarsovich and Rob Fonseca (Northeastern).