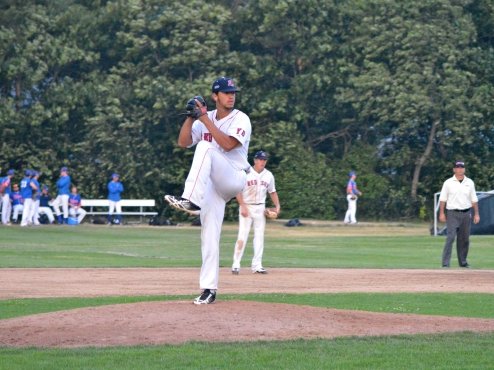 Y-D got on the board early when a solo homerun by Hunter Cole (Georgia) gave the Red Sox a 1-0 lead. It was Cole?s fourth homerun on the year. After falling behind 2-1 on an RBI single by Orleans outfielder Brett Stephens (UCLA), the Sox took the lead for good with a two-run fourth inning. Simcox singled to center to score Jesse Jenner (San Diego) and a balk by starting pitcher Kolton Mahoney (BYU) allowed Josh Lester (Missouri) to score.

Simcox extended Y-D?s lead in the sixth inning, as he singled in Rob Fonseca (Northeastern) for his second RBI of the game. Jordan Tarsovich (VMI) also drove in a run in the sixth on a single to center to give the Red Sox a 6-2 lead.

Justin Jacome (UC-Santa Barbara) pitched six exceptional innings, allowing only two runs (one earned) on seven hits, while striking out five. Dimitri Kourtis (Mercer) secured the win for the Red Sox and earned his third save of the season. Kourtis went two and two-thirds innings, surrendered only one hit, and struck out five batters. Kourtis and Phil Bickford (Cal State Fullerton) have been the bright spots for Y-D?s bullpen and continue to make it hard for opposing teams to score in the late innings.

The victory was Y-D?s ninth win in eleven games and brought their record to (14-13) on the season. Orleans now sits at (16-11) following the loss. The Red Sox travel to Lowell Park on Sunday, July 13 to take on the Cotuit Kettleers. First pitch is set for 5:00pm.?