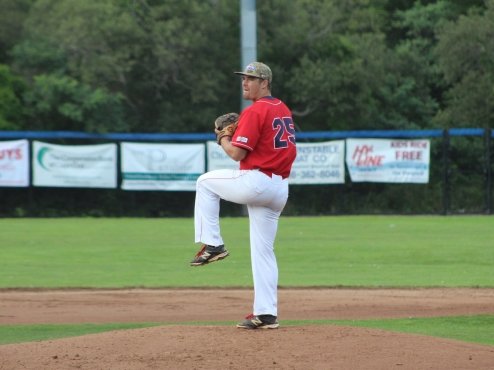 HYANNIS, Mass. ? The Hyannis Harbor Hawks posted five unearned runs in the fifth inning and Dakota Hudson (Mississippi State) threw eight innings on the bump for Hyannis as the Hawks took Game 1 of the Cape Cod Baseball League Championship Sunday at McKeon Park; an 8-1 decision over the Yarmouth-Dennis Red Sox.

The win moves Hyannis within one victory of its first championship since 1991.

Y-D?s lone run came in the top of the second inning. After Dallas Carroll (Utah) singled with one out and stole second, Tyler Houston (Butler) grounded out to move Carroll to third. Michael Donadio (St. John?s) then reached on an infield single to plate Carroll.

Hyannis responded in the bottom of the second when Tristan Hildebrandt singled to left field, scoring Jake Rogers to even the score at one apiece.

A five-run fifth ultimately put the Harbor Hawks ahead for good. After Y-D starter Mason Kukowski (Yale) worked two quick outs, four Hyannis hits and two Red Sox errors led to a full trip through the batting order for the Hawks, giving them a 6-1 lead.

The home team also tacked on runs in the sixth and eighth inning to reach the 8-1 final score.

Kukowski (Yale) threw 4.2 innings and was dealt the loss (0-1), while Hudson (2-0) earned the win, holding the Red Sox to just two hits over his eight innings.

With the Hawks now up 1-0 in the best-of-three set, the series shifts to Y-D?s Red Wilson Field for Game 2, scheduled for 4 p.m. Monday. The Red Sox must win to force a Game 3 back in Hyannis.