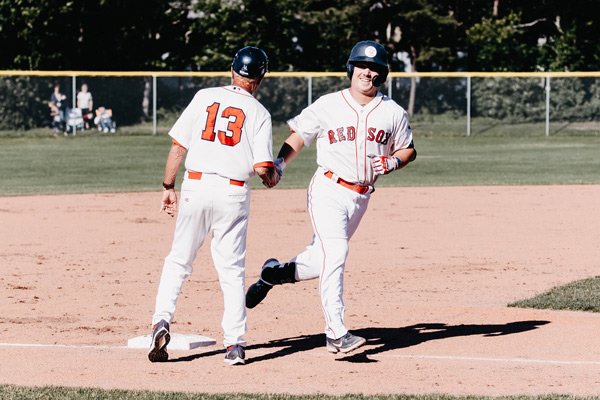 When Brock Ungricht joined the staff at the Univerisity of San Diego in 2018, his first task was to go to an event in Los Angeles to look for any potential talent the Toreros should recruit.

After having just spent six seasons with Stanford and two years scouting for the St. Louis Cardinals, Ungricht dove right into the job, going to Los Angeles right after the 2018 MLB draft.

When he found Chase Meidroth at that event in L.A., Ungricht was quick to go after the under-recruited middle infielder to try and bring him to USD.

“Nobody recruited this guy,” Ungricht said. “I don’t know if it was just an afterthought or whatever, but I was like we got to jump on this guy.”

In his first two years at San Diego, Meidroth didn’t see the field much. He found himself on the back end of a “logjam,” where there were plenty of older guys ahead of him on the depth chart due to the extra year of eligibility granted by COVID. Across 2020 and 2021, he only got 32 at-bats.

Despite not seeing much time on the field, he took advantage of the limited opportunities he had. On May 7, 2021, Meidroth worked a full count and fouled off three pitches before hitting his first collegiate home run in the ninth inning against BYU.

It was Ungricht’s first season as head coach of the program, as he took over when Rich Hill left to take the same position at the University of Hawai’i.

He saw firsthand the impact that Meidroth, the first player he recruited as an assistant years earlier, become a staple at the top of the San Diego lineup.

“Chase was going to get a walk, a double, a hit, whatever it was,” Ungricht said. “It was like that was a catalyst to get the lineup going, the team going. They thrived off his personality.”

Meidroth’s offensive ascension helped lead the Toreros to a 37-20 record, a WCC tournament championship and an NCAA tournament appearance.

In the WCC tournament, Meidroth scored in every game, including four times in the Toreros 15-12 11-inning victory over Gonzaga in the championship game.

After coming up one game short of a conference title in 2021, the Toreros had gotten over the hump in 2022.

“It was so awesome to see those guys come together as a unit,” Ungricht said. “And Chase’s personality, I think reflects on a lot of the guys on the team. He was the guy to set the table.”

Meidroth was quick to credit Ungricht and assistant coach Erich Pfohl for helping him get his swing and overall game to new heights.

“Ungricht has done everything for me. He’s helped me get to where I am at today. Probably one of the best coaches I have ever played for down there. Erich Pfohl as well,” Meidroth said. “Both those guys helped elevate my game this year to where it wanted to be.”

For summer ball, Meidroth chose to come to Cape Cod and join the Red Sox. After playing in the West Coast League and the Northwoods League in previous summers, Meidroth was excited to come East for at-bats against premier competition.

With the draft looming and scouts behind home plate at every game, Meidroth was able to shift his focus to his teammates and the field, trying to keep his mind clear so he could continue to perform at a high level.

“He’s had to learn that. And it’s cool to see him kind of get those answers himself,” Ungricht said. “He’d say ‘I’m focusing on having quality at-bats, I’m focusing on one pitch at a time.

“That’s all you can control, right? And with Chase, I really felt he got over that hump this summer.”

While the slugging numbers that he brought from USD weren’t as prevalent on the Cape, Meidroth posted a .434 on-base percentage, second on the team behind only Luke Shliger. Across 22 games, Meidroth hit .286 with a home run and seven RBIs and had more walks (15) than strikeouts (14).

“This is a really special group to be a part of,” Meidroth said after his final game on Thursday. “So I’m just thankful I got the opportunity to come out here and play with some of my best friends now, and I’ll cherish some of these relationships forever.

“I’ve always heard this place is a dream come true, and it’s definitely lived up to that.”

Now, Meidroth is back home in southern California, spending time with his family while waiting to learn where the first stage of his professional career will take place.

No matter where he ends up, Ungircht is confident that he will be able to make the jump to the professional level.

“He’ll give his heart and soul for any program, any team, any organization… and he’s a fun one to be around.”

The MLB draft begins tonight at 7 p.m. EST on ESPN and MLB Network. Tonight will include the first two rounds, compensation picks, and competitive balance picks. Day two will be rounds 3-10, and day three will conclude with rounds 11-20.

Stay tuned throughout the next three days to the Y-D Red Sox Twitter page for updates on where Meidroth and other current and former Y-D Red Sox are selected.