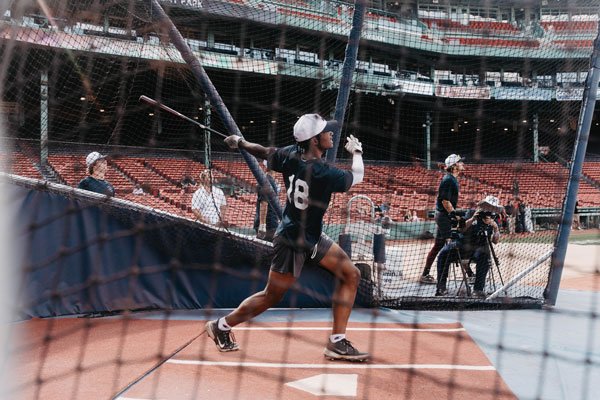 At the Cape League’s Fenway workout on July 11, Homer Bush Jr. hit two home runs over the Green Monster. To be more specific, Homer Bush Jr. obliterated two baseballs over the most famous wall in the MLB and tore the cover off the ball all day. Pick any baseball idiom for “hitting a ball hard” and that could be used to describe Bush’s batting practice rounds at Fenway Park.

For a man who entered the off-day workout hitting .211, conquering the Green Monster imbued Bush’s approach with a wave of confidence. It’s helped the Grand Canyon University outfielder emerge as one of the top bats on the first-place Yarmouth-Dennis Red Sox roster.

“I’m only 20 right now and I’m able to clear the Monster like that. It lets you know that the sky’s the limit,” Bush said.

Bush, now hitting .324 with eight stolen bases, will suit up for the Cape League’s East Division All-Star team Saturday night, an honor that seemed out of reach early in the year. But with his recent hot stretch and seven-game hitting streak, Bush, along with his game-changing speed, has been honored as one of the league’s best.

“I feel like I’m in a position where my mechanics are sound, and I can just kind of focus on timing and hitting the baseball,” Bush said. “So I’m locked in more than I’ve been in a long time.”

Bush opened the season with three hits in his first start against Bourne, then entered into a slump. He struggled to get on base, where his wheels are most dangerous, over a 5-for-34 stretch. It dropped his average to .206 at its lowest.

But after the workout at Fenway, where Bush not only conquered the Green Monster but also ran the fastest sprint time across the Cape League, Bush came into his own. The 6’3” outfielder recorded hits in his next seven games, including four multi-hit games. Even after the hit streak ended, he followed his first 0-for in over a week with a four-hit day. In his last nine games, Bush is hitting .455 (15-for-33).

“Earlier on in the year, like, I was pretty down bad,” Bush said. “My confidence was in the gutters. So to be in this position where I can walk up to the plate and know no matter who I’m facing that I have a chance to get a hit, that’s big for me.”

Everything Bush is doing now at the plate is working. His timing is locked down, leading to a number of those recent hits being line shots right back up the middle. That’s been an emphasis for Bush and Y-D field manager Scott Pickler all year long, and it’s finally paying dividends.

“He’s got a lot of confidence right now,” Pickler said. “His swing has gotten better, his approach is much better. He’s done a really good job.”

Bush’s biggest and most projectable tool is, obviously, his speed — and he’s well aware of it. Bush said there are things he can do that others “scientifically can’t”. In a recent game against Cotuit, he scored on a wild pitch that barely got up the first base line. He pulled off a key steal of third to eventually score the go-ahead run at Brewster, and stole four bases in his first start of the summer against Bourne.

Combining that speed with Bush’s hot hitting at the plate makes the perfect leadoff hitter. He moved up to that spot for a July 14 game against Chatham and has never looked back.

“He’s having some success, and having that kind of speed in the lineup is big for us,” Pickler said. “When you have him and Cole Carrigg at the top of your lineup, both guys can fly.”

Bush has played center, right, and left field for Y-D this summer. While the outfield at Red Wilson Field is one of the smallest in the Cape League, ballparks such as Orleans’ Eldredge Park have expansive space in centerfield. Bush said that while he loves playing at Red Wilson, some of the other ballparks in the league give him a bit more freedom to show off his plus-plus speed.

“I feel like there’s never a ball I can’t get to,” Bush said. “Playing here, sometimes I feel a little constrained because it’s a small outfield. Sometimes it feels a little helpless here when a ball is hit that at 99% of other ballparks in the country, it’s an out, but here it’s over the fence.”

In the field, Bush’s speed gives him all the time in the world. But at the plate, timing is everything for him. He’s done the work, he survived the rough stretch, and now, Homer Bush Jr. is reaping the rewards at the plate.

“Whenever your mechanics are good but your timing’s off, then it’s automatically going to throw you off,” Bush said. “The biggest thing for me is just continuing to make adjustments to where my process can be as consistent as possible.”

1 thought on “How conquering the Green Monster helped Homer Bush Jr. become one of the Cape’s hottest hitters”