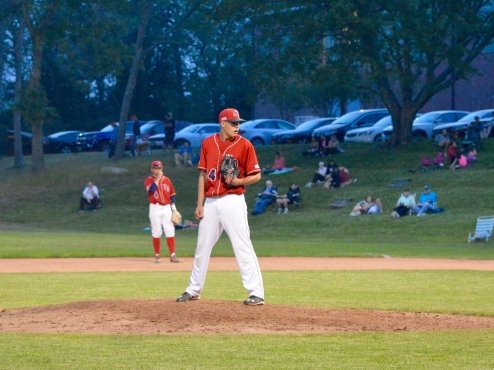 SOUTH YARMOUTH, Mass. ? Harwich?s Sheldon Neuse tripled in the seventh inning, driving in two runs, and the Mariners held off a late Y-D Red Sox rally to preserve a 4-3 win for the visitors at Red Wilson Field on Wednesday.

The matchup was highlighted through the first five innings by a back-and-forth battle between both teams? offenses. Y-D struck first in the second inning when Ryan Noda (Cincinnati) singled to score Stephen Wrenn (Georgia). The Mariners responded promptly, as Matt Gonzalez (Georgia Tech) clubbed his first home run of the summer to even the score at one in the third frame.

The Red Sox ultimately held the lead at two other points in the contest, plating runs in the fourth and fifth innings. Cape Cod native Will Toffey (Vanderbilt) crossed the plate in the fourth inning on a Wrenn groundout, while Tommy Edman (Stanford) singled in the fifth, allowing Connor Wong (Houston) to come in.

Harwich tacked on its second run in the top of the fifth when Neuse (Oklahoma) grounded into a double play, scoring Brock Deatherage (NC State).

Trailing 3-2, the Mariners went ahead in the seventh inning, maintaining the lead for the balance of the game. After two quick outs, Deatherage singled to left field and Adam Pate (North Carolina) drew a walk, setting the stage for Neuse. The rising junior sent a 1-2 offering to right center field for a triple, allowing Deatherage and Pate to score.

Y-D threatened in the bottom of the ninth, but stranded the tying run in Noda at third.

Perhaps most overlooked throughout the night was both teams? pitching, which combined for 19 strikeouts. Y-D starter Dustin Hunt (Northeastern) tallied 8 strikeouts in four innings, including fanning five of the first six batters he faced.

Harwich?s Spencer Trayner (North Carolina) earned the win (3-0) on the mound, while Alec Eisenberg (Hofstra) was dealt the loss (0-2) for the Red Sox.