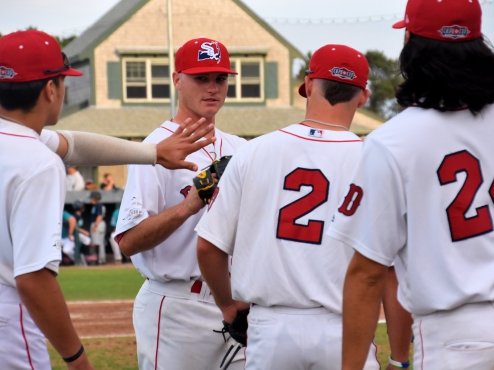 ORLEANS – Losing two straight games to the worst team in the league was the spark that the Yarmouth-Dennis Red Sox needed to come into the playoffs with a new wave of energy and a fired-up mentality. While the Hyannis Harbor Hawks packed up their bags for one last time this summer and the rest of the Red Sox walked over to concessions for dinner after the loss Wednesday night, Austin Wells (Arizona) and Carson Taylor (Virginia Tech) headed to the batting cage to take some more swings.

The team that looked dead against the Harbor Hawks just three days ago looked like a revitalized team that is capable of winning it all last night. The No. 3 Red Sox’s nail-biter of a victory over the No. 2 Orleans Firebirds featured gutsy performances by all three Y-D pitchers – Eric Tolman (Arizona State), Carlos Lomeli (St. Mary’s), and Oscar Carvajal (Fresno State) – a 2-4 performance at the plate by Tate Samuelson (Cal Poly), a two-run home run off the bat of Andrew Eyster (South Carolina), and, most importantly, an electric dugout.

It was a game of strikeouts for both teams, as the Red Sox struck out 14 times and the Firebirds struck out 16. Both teams recorded nine hits and walked four times. The Y-D offense was led by Samuelson who went 2-4 with a double, a run, two RBIs, and a walk. Riley King (Georgia) and Carson Taylor (Virginia Tech) each went 2-5, and Eyster hit the two-run bomb that ended up being the difference in the game for the Red Sox.

The game was somewhat sloppy on both sides, as Y-D made two errors and Orleans made three, but it was also filled with defensive gems and a number of hustle plays. In addition to throwing harder than we’ve seen him throw all year, Tolman picked off two baserunners and made an athletic glove flip to Austin Wells (Arizona) behind the plate to get an Orleans runner out on an attempted suicide bunt. Jake Palmer (UC Irvine) also made two excellent catches in right field, and Brad Beesley (Cal Poly) continued to cover a tremendous amount of ground out in center field.

Tolman, Lomeli, and Carvajal demonstrated more heart and composure than we’ve seen all season from the Y-D pitching staff. Tolman was locked in for all 4.2 innings he pitched, striking out eight and giving up just three hits, one run, and one walk. Lomeli got the win after striking out four and giving up four hits, four runs, and two walks in 3.1 innings of work. Carvajal struck out two and gave up two hits, one run, one walk to shut the door on the Firebirds and get the save.

Orleans scored the first run of the game in the bottom of the third inning on a Texas leaguer that dropped in shallow right field, a stolen base, and a double over the head of Eyster in left field.

The Red Sox answered in the top of the fourth, scoring three runs on three hits. Taylor singled into right field and Samuelson doubled off the left-center wall to make it a 1-1 game. On the next play, Eyster ripped a two-run shot over the right field fence – his first long ball in over six weeks.

Two throwing errors and one hit gave Y-D another run in the top of the fifth inning. King reached first on a perfectly placed swinging bunt and advanced to third on a failed pickoff attempt. A second throwing error by an Orleans fielder allowed King to make it a 4-1 game.

Beesley scored the Red Sox’s fifth run of the game on a fielder?s choice by Samuelson in the eighth, and the Red Sox scored another two runs on two hits and one error in the ninth. Pinch hitter Jack-Thomas Wold roped a double down the right field line, and pinch runner R.J. Yeager came around to score on a Wyatt Young (Pepperdine) RBI single. A wild pitch, a pass ball, a walk, and an error allowed Young to score the Red Sox’s seventh run.

The Firebirds’ comeback effort fell short despite coming within one run in the bottom of the ninth. Carvajal came in with bases juiced and worked out of a tough situation to secure the 7-6 victory for the Red Sox.

Game two of round one will take place at Red Wilson Field tonight at 4 p.m. Ledgend Smith (Oklahoma) will start on the bump for the Red Sox. Smith accumulated 29 strikeouts and just nine walks in 26 innings pitched throughout the regular season with a 4.50 ERA.

The No. 4 Harwich Mariners threw a combined no-hitter against the No. 1 Chatham Anglers yesterday to take a 1-0 advantage in the series. According to Chris Thoms – a statistician for the league – it was the first CCBL postseason no-no since at least 2000. If Y-D wins today and the Harwich Mariners do not, the Red Sox will have tomorrow off before beginning the second round of the playoffs Monday. If the Chatham Anglers get swept, the Red Sox and Mariners will face off tomorrow.

In the West Division, the Wareham Gatemen beat the Cotuit Kettleers 8-7 on a walk-off, and the Falmouth Commodores beat the Bourne Braves 3-2.