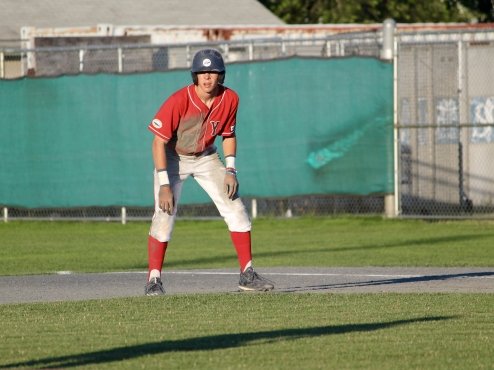 rn By Lance Reynoldsrnrn?rnrnOne of the strongest attributes that Christian Koss brings to the Y-D Red Sox is his grittiness.rnrn?rnrnIt is no surprise that Koss, who is tabbed as the Red Sox utility infielder this summer, is willing to play wherever field manager Scott Pickler slots him in the infield, whether it be at second, shortstop, or third.rnrn?rnrnThe UC-Irvine product plays the game of baseball hard. If he has to lay out for a ball on the infield dirt, or if he has to dive around a tag on the base paths, Koss will put in the extra effort and is not afraid of dirtying his uniform.rnrn?rnrnAs Sunday?s game against the Wareham Gatemen at Spillane Field wore on throughout the evening, Koss stepped up when it mattered the most in a thrilling 3-1 11-inning victory.rnrn?rnrnIn the top of the eleventh after Kyle Isbel was thrown out at third by Gatemen centerfielder Noah Angelini, who fielded an Alex McKenna single, pinch-hitter Carlos Cortes hit a single to put runners on first and third with two outs.rnrn?rnrnThe situation presented itself for Koss. He was given an opportunity to knock in the go-ahead run. He knew he did not need to do too much, as that go-ahead run was standing just 90-feet away.rnrn?rnrnOn the very first pitch of his at-bat against Wareham?s Riley Gates, Koss lined a single up the middle and into centerfield to bring in McKenna with the game-winning run to make it 2-1.rnrn?rnrn?Any time you get a go-ahead RBI it?s a good feeling,? Koss said. ?I went into that at-bat knowing I had to hit something solid. I was seeing sliders all day, so it was just something I was going to sit on and I got a good pitch to hit.?rnrn?rnrnConnor Kaiser followed with Y-D?s third two-out single of the eleventh driving in Cortes with an insurance run to extend the lead to 3-1.rnrn?rnrnIn addition to his game-winning single, Koss made several of the biggest plays in the field for the Red Sox.rnrn?rnrnKoss, who started at shortstop Sunday, but moved to third in the seventh, started an inning-ending double play in the bottom of the eighth. After Gateman Tanner Dodson led off the eleventh with a double, Koss made a bare-hand stab on a Kyle Kasser bunt attempt for the key first out of the final frame.rnrn?rnrn?Defensively, I just try to do as best of a job as I can,? Koss said. ?Any ball I can get to, any ball I can make a play on, I try to do what I can. Luckily, I made my plays tonight.?rnrn?rnrnKoss recorded his first of the game on a lead-off single in the top of the seventh and reached third on a Drew Mendoza single. Koss, then, attempted to score the second Y-D run of the game on a Carter Pharis fielder?s choice, but he was thrown out at the plate by Kasser, Wareham?s shortstop.rnrn?rnrn?It was a pretty weird play and probably something I shouldn?t have done,? Koss said. ?[I] tried to gamble, but it?s a long game – nine innings, and this one ended up being 11, but you can?t hold grudges, can?t keep things down too long. Just onto the next play.?rnrn?rnrnAfter a slow start to his summer, Koss has been red-hot at the plate over the past week-and-half. The utility infielder has collected 11 hits in his past seven games played.rnrn?rnrn?Coach Pick has done a lot with me. He?s helped me with certain stances and getting better pitches to hit,? Koss said. ??I think I?m just seeing the ball really well right now. I?m swinging at strikes, which always helps, and luckily, balls are falling for me.?rnrn?rnrnY-D (12-10-1) begins a four-game homestand Monday against the Brewster Whitecaps with a 5:00 first pitch at Red Wilson Field.rnrn?rn