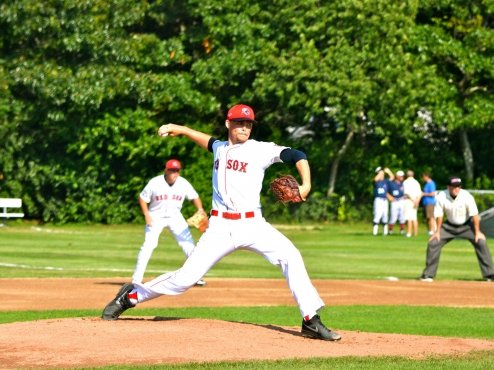 Y-D posted nine hits to Harwich?s seven, but the visitors wound up with the upper hand on the big board.

Ronnie Glenn (Penn) picked up the win on the mound, while Greg Ostner (Binghamton) received the loss.

Harwich tallied four in the first frame, marked by a two-run home run courtesy of C.J. Hinojosa. The righty from Texas sent a 1-2 offering from Ostner over the fence in left-center field for a two-run shot. Brendon Sanger (Florida Atlantic) later drew a bases-loaded walk to score Ian Happ (Cincinnati), then Gonzalez (Virginia) reached on a fielder?s choice to score Anthony Hermelyn (Oklahoma).

All four first-inning runs were charged to Ostner, who was replaced on the bump by Josh Staumont (Azusa Pacific) after five straight batters reached to open the game. Josh Pierce (Kent State) and Zac Favre (Central Fla.) also made relief appearances for the Red Sox.

Two more came in for the Mariners in the second when Hermelyn got aboard on another fielder?s choice to plate Joe McCarthy (Virginia). Four pitches later, Hinojosa came in on a wild pitch to extend his team?s lead to 6-0.

Staumont threw 4.2 innings and allowed three runs, two of which were earned. Despite walking four batters, he struck out six.

Michael Donadio (St. John?s) continued to pace the Red Sox offense, posting two singles on the evening. He was the only player on the Y-D roster to have more than one hit.

Y-D?s lone two runs came in the bottom of the fifth inning. With runners on first and second, T.J. Wharton (Catawba College) stepped in. On the first pitch, both Andrew Stevenson (LSU) and Rob Fonseca (Northeastern) took off for third and second, respectively. Both reached, but a throwing error by Hermelyn allowed Stevenson to score. Fonseca came in later after Wharton singled to left, making the score 6-2 at the time.

Harwich wrapped up its offensive efforts in the seventh inning when Gonzalez hit his three-run homer.