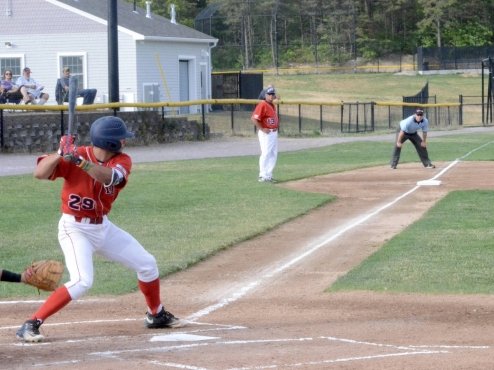 BOURNE, Mass. ? The Yarmouth-Dennis Red Sox defeated the Bourne Braves, 4-1, at Doran Park on Wednesday night. Will Gaddis (Furman) was excellent for the Red Sox, keeping the Braves scoreless over eight innings of work. He earned the win in tonight?s contest, moving to 2-1 on the season, while Brady Miller (Western Oregon) took the loss and fell to 0-1. Miller entered the game not having allowed a run this season, but Y-D was able to get to him early and chase him from the game in the fifth inning.

The Red Sox got on the board first in the top of the second inning. Kevin Smith (Maryland) and Deon Stafford (Saint Joseph?s) led off the frame with two singles, and Mikey Diekroeger (Stanford) moved them into scoring position with a sacrifice bunt down the third base line. With Colin Lyman (Louisville) at the plate, Y-D executed the squeeze perfectly and Smith slid in with the game?s first run.

Y-D kept the offense going in the top of the third, as the Red Sox again got two runners on base quickly after infield singles by Houston and Brendan Skidmore (Binghamton). With two outs in the inning, Smith drew a walk after an eight pitch at bat, which loaded the bases. Stafford then hit a hard groundball past the diving third baseman, scoring Houston and Skidmore and giving the Red Sox a 3-0 lead.

The Braves tallied their first hit of the game in the bottom of the fourth on a triple to right-center field by Justin Yurchak (Binghamton). But, a shallow fly ball and a ground out got the Red Sox and Gaddis out of the inning unscathed.

Nolan Brown (Texas Christian) laced a two-out double in the top of the sixth, hitting a fly ball to deep left field. Houston followed with a line drive single, his third hit of the game, scoring Brown and extending the Red Sox?s lead to 4-0.

The Braves pushed one run across in the bottom of the ninth, but Calvin Faucher (California Irvine) was able to retire David MacKinnon (Hartford) to end the game.

Gaddis looked sharp all afternoon, throwing eight shutout inning and allowing just three hits while striking out six. According to the radar gun at Doran Park, Gaddis sat between 91-93 mph with his fastball in the first inning, and was able to maintain most of that velocity throughout his start. He was perfect through the first 10 batters, and retired the next seven Braves after allowing his first base runner. He now has a 1.37 ERA this season across four starts.

Tyler Houston led the offense on Wednesday night, tallying three hits and driving in a run against his former team. This makes him 6-for-9 against the Braves this season with three RBI and two runs scored.

JJ Muno (California Santa Barbara), Stafford and Smith tallied two hits as well. This was Muno?s first game with the Red Sox, and he?ll look to slot in at second base regularly for Y-D.

The Red Sox will continue on the road to face Harwich on Friday night. First pitch is at 6:30 p.m.