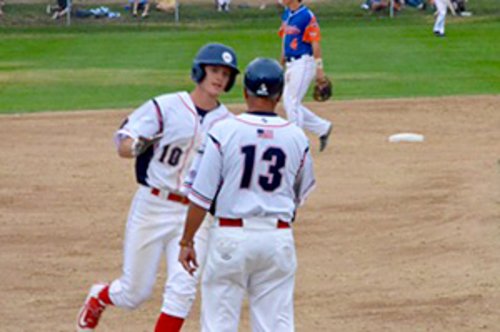 A summer on the Cape wasn’t something out of the ordinary for Barnstable native Will Toffey. Coming off of an All-American freshman year, Toffey spent the first of his two summers under Coach Pickler as a fill-in, but starred for the Red Sox in his second season in 2016. The infielder was a marquee piece on the 2016 “three-peat” team, providing important home runs in both Game 2 of the opening round and Game 2 of the Championship. In 36 games with the Red Sox in 2016, Toffey hit .283 in 127 plate appearances with a .360 average in the playoffs. Toffey was the 24th ranked prospect in the Mets organization in 2019 and was recently assigned to the Triple-A affiliate Syracuse Mets.

When Sweeney got to the MLB, he had trouble finding a long-term home. Over the
course of his 13 year career, the Holliston native played for 7 teams, making stops in St. Louis, San Diego, Cincinnati, Milwaukee, Colorado, San Francisco, and Los Angeles.
Sweeney, who originally was recruited by UMaine to play quarterback, made the switch to baseball when he arrived in Orono, which was a decision that worked out well for him as he swiftly gained notoriety for his strong offensive skills. Sweeney joined the Red Sox in 1989 after spending the previous summer in Chatham. Upon arrival, he made an immediate impact as he led YD to their first league title in the modern era in 1989 and again in 1990. Sweeney became the first Red Sox to win the playoff MVP award during the playoff push of 1989 when he batted .500 in 20 at bats. Sweeney returned to YD for the 1990 season, leading the team to the second title in two seasons after he knocked in the game-winning RBI in the ninth inning of Game 3. Sweeney was inducted to the Cape Cod Baseball League Hall of Fame in 2018.

Something about Massachusetts makes Ben Bowden excel on the field, as the former Massachusetts High School Player of the Year starred on the Cape during his lone season with the Red Sox. A native of Lynn, MA, Bowden starred for his school’s baseball team before enrolling at Vanderbilt University. After his sophomore season, Bowden joined the Red Sox and helped secure the second title in the team’s “three-peat”. Over the season, Bowden posted a 0.30 ERA with 43 strikeouts across 30 innings pitched. Following the championship win, Bowden was awarded the playoff co-MVP award alongside Donnie Walton.

1 thought on “From Locals to the League: 3 Players from the Bay State who Played for Y-D.”