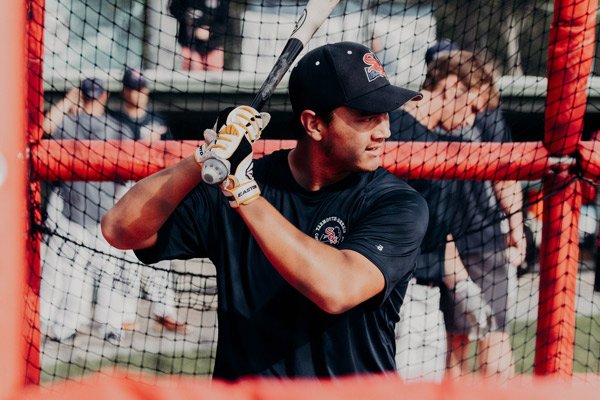 Whenever a high school player puts up exceptional numbers in a high school sport, there are usually at least a few college teams interested in adding them to their school’s roster.

For Jonathon Long, however, it took a travel ball coach connection for him to be able to get on the radar of a coach at the next level.

Long began playing baseball when he was young, tagging along to his brother’s travel ball games with a wiffle ball and a glove, playing with any kids that would join him.

His journey to the Cape Cod League began at Orange High School in his hometown of Orange, California. Despite putting up excellent stats, Long wasn’t generating the attention of scouts or coaches in the collegiate ranks.

“The stats were kind of like, you look at him with an asterisk,” Long said. “Oh, you know, he’s not facing the best competition.

Ultimately, his coach, George Chace, steered Long to a travel program owned by Steve Trombly. ‘Trombly Baseball’ has had its fair share of future big leaguers come through the program, including stars like Bryce Harper, Freddie Freeman and Gerrit Cole.

There, with Long facing the uncertainty of whether or not he would play baseball beyond high school, Trombly put Long in touch with Long Beach State coach Eric Valenzuela. The two had a strong connection dating back over 20 years, and Long’s athletic and academic ability stuck out to Valenzuela.

Valenzuela was impressed enough to offer Long the chance to walk on and play baseball at Long Beach State. Considering it was his only offer and just a short 15 miles from his hometown, Long committed before his senior season.

Despite graduating from high school in 2020, Long wasn’t able to meet with his college teammates until February 2021 due to the COVID-19 pandemic.

While Long didn’t play the top competition in high school, he was excited to face guys with “plus stuff” on a regular basis, knowing it would help him improve as a hitter.

When the season began in March, Long excelled in his role, hitting .341/.410/1.001 with five home runs and 16 RBIs in 27 games before a knee injury ended his season prematurely.

Not only did Long shine on the diamond, but he was also a standout in the classroom as well. The combination was enough to earn him a scholarship for his sophomore season. Long’s sophomore season was just as impressive, as he hit .311/.411/.865 with six home runs and 37 runs batted in across 50 games.

Long earned Big West Field Player of the Week after a stellar opening series against then No. 3 Mississippi State, slashing .545/.583/1.182 with two home runs, five runs batted in and scoring four runs, helping the Dirtbags take two out of three against the defending champions.

“Probably taking two out of three in Starkville,” Long said before the season about his favorite baseball memory. “Playing in front of 12,000 people or whatever it was was pretty cool.”

Long stuck out to Y-D Field Manager Scott Pickler, who saw him hit live as a freshman at Long Beach State.

“I saw him and said this kid can hit,” Pickler said. “He can really hit.” After a short conversation with some Long Beach State coaches, Pickler was confident that Long could contribute for Y-D on the Cape.

This summer with the Red Sox, Long has shown flashes of the pop that has found him success at Long Beach State but has struggled to put it together consistently. In 17 games so far this summer, Long is hitting just .176 with a home run but is tied for the team lead with eight runs batted in.

Long entered the summer with the same mindset he went into Long Beach State with, knowing that the pitching he would face this summer would be the toughest competition of his career. Long embraced that fact, however, knowing that it will only improve his game.

“It’s better than what I faced at Long Beach State,” Long said, citing the skill of Cape League pitchers. “It’s a bit of a struggle. But, you know, it’s going to make me a better player and that’s ultimately what I am after.”

Pickler recognizes that Long has been hard on himself about his struggles, but also knows that Long has the skill and potential to be able to put it all together.

“He’s had some bad luck so far this season,” Pickler said, acknowledging that Long has had some hard-hit balls find gloves. “And he’s hard on himself about it, but we’ll get him to loosen up and have some fun. Because the swing will work.”

No matter how Long finishes statistically on the Cape this summer, Long knows that he can use this opportunity to continue to push himself forward, both on and off the field.