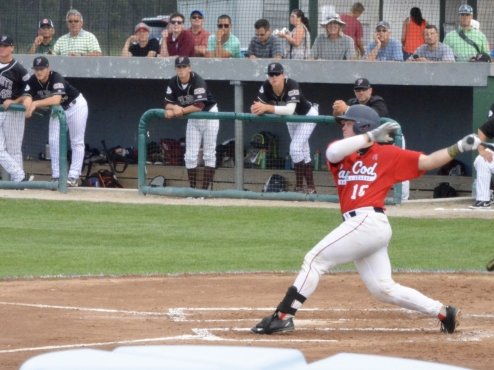 SOUTH YARMOUTH, Mass. ? Fueled by a five-run sixth inning, the Yarmouth-Dennis Red Sox (18-11) earned the victory over the Falmouth Commodores (17-12) by a score of 8-4 on Friday. Deon Stafford Jr. (Saint Joseph?s) lead the offense with two hits and two RBI, and Dillon Persinger (California State Fullerton) hit his first home run of the season.

The Commodores struck first in the top of the second. After Trevor Larnach (Oregon State) reached with a single, Tyler Lawrence (Murray State) roped a double to left field, over the head of Stafford and scoring Larnach.

Y-D responded, however, tying the game in the bottom of the third. With Mikey Diekroeger (Stanford) on first base, Nolan Brown (Texas Christian) lined a single up the middle, putting runners on the corners. Matt Winaker (Stanford) then poked a single to right field, driving in Diekroeger and evening the game at 1-1.

After a single and a walk for Falmouth in the fifth inning, Tristan Gray (Rice) laid down a sacrifice bunt, moving the runners to second and third with one out. Matt McLaughlin (Kansas) lifted the second pitch he saw from Erich Uelmen (Cal Poly) into right field, scoring Lawrence and giving Falmouth the lead.

But, Dillon Persinger launched a solo home run over the center field fence to start the fifth inning, and the game was once again tied. This was Persinger?s first home run and third extra-base hit of the season.

The bottom of the fifth inning was merely foreshadowing things to come for the Red Sox offense, as they exploded for five runs in the next inning. After Kevin Smith (Maryland) and Diekroeger singled, Persinger drew a walk to load the bases with one out. JJ Muno (California Santa Barbara) then hit a hard groundball down the line to JJ Matijevic (Arizona) at first base. Muno had to duck out of the way of Matijevic?s throw home, blocking the catcher from clearly seeing the throw and causing it to skip past him. Smith and pinch runner Tyler Houston (Butler) came around to score, and Y-D retook the lead, 4-2.

Later in the inning, Brendan Skidmore (Binghamton) drew a bases loaded walk to push across another run. Stafford followed with a hard ground ball into left field, scoring Muno and Will Toffey (Vanderbilt) and extending the lead to 7-2.

The lead would prove insurmountable for the Commodores, as they pushed across two runs in the top of the seventh but were unable to mount a comeback. Y-D added an insurance run in the bottom of the eighth when Connor Wanhanen scored from third base on a wild pitch.

After entering the game with runners on first and third with one out, Sam Delaplane (Eastern Michigan) threw 2.2 innings of scoreless relief to close the game.

Michael Baumann (Jacksonville, 2-2) earned the win for Yarmouth-Dennis, while Brett Gilchrist (Dallas Baptist, 2-1) was tagged with the loss for Falmouth.

Erich Uelmen (2-0) took the hill for the Red Sox on Friday night, looking to rebound from a tough start in Orleans last week. He looked good despite giving up two runs across 4.2 innings tonight, as he allowed only three hits and struck out five.

Uelmen sat around 90-92 mph with his fastball on Friday evening, which has crisp arm-side movement that causes it to move away from left-handed hitters. He also featured a devastating 82 mph slider that he located well and used effectively against right-handed hitters.

Kevin Smith continues to give right-handed pitchers trouble, as he recorded two hits against righties tonight. He has posted a .338 batting average against them this season.

With the victory, the Y-D Red Sox move to 14-0 when leading after six innings. This was also their sixth straight victory at home, which is the longest active streak in the league and ties the longest streak recorded this season.

The Red Sox also take over sole possession of first place in the East Division and have the best record in the league. They?ll look to keep the momentum going tomorrow night against Chatham at Veteran?s Field. First pitch is at 7 p.m.