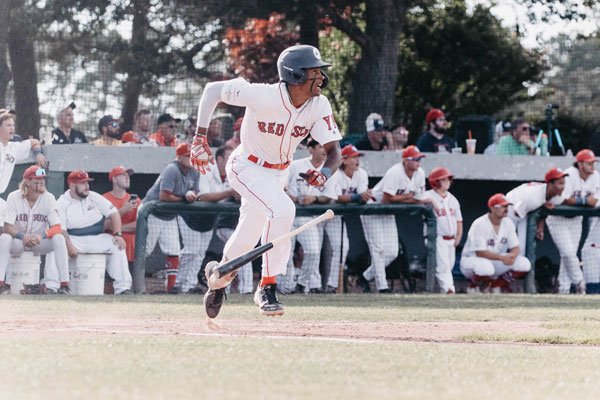 If there’s a book titled “How To Win a Baseball Game”, it doesn’t make any mention of conceding five runs in a single inning. That’s because doing so makes it significantly more difficult to win — especially when you do so in the first inning.

The Yarmouth-Dennis Red Sox did not read that chapter, and haven’t even picked up the book on how to win since the All-Star Break. The Red Sox lost their sixth straight game, this time by giving up five runs to the Hyannis Harbor Hawks in the first frame and despite putting up four runs in the second, they never fully recovered in a 7-5 loss Sunday night at Red Wilson Field. The game was called after eight innings due to darkness.

It’s the first time in over a decade the Red Sox have lost that many consecutive games. While the Red Sox left the All-Star Break with a magic number of four to clinch the East Division, it has only dropped to three in the past week.

Y-D starter Treyjen Meza couldn’t find the strike zone in a disastrous first inning, getting pulled after recording just one out on a long fly ball to center field. Meza surrendered three runs before he was relieved on three hits, two walks, and an error, then two runners he left on base scored on a single from Christian Moore.

While Vaughn Mauterer recorded the final two outs of the inning out of the bullpen, the Red Sox had already dug themselves quite a deep hole. It felt like the kind of hole that’s impossible to get out of, even with the kind of ladder that sits atop a fire truck.

The Red Sox, to their credit, did as much as they could to get out of that hole in the second. Jonny Long kicked off the rally by lining a two-run homer to left. The ball left Long’s bat at 107 mph, and got Y-D on the board.

After Dom Freeberger walked and Waldier Perez reached on a dropped third strike, Homer Bush Jr. lined a two-run double to right-center field, advancing up to third on an error in the outfield.

For a team that went down by a big crooked number after one inning, the Red Sox showed plenty of fight. The four-spot in the second inning made it a one-run game, and three Red Sox runners reached base in the fourth — though they couldn’t score.

“We had some fun today,” Y-D Field Manager Scott Pickler said. “They played with energy tonight.”

The Hawks tallied two runs in the fourth off Sam Brodersen on a fielder’s choice and a single to give them some insurance. And when Hyannis brought Jordy Allard out of the bullpen to relieve Jake Berry, the Red Sox struggled to get anything going offensively.

Allard sat down eight in a row at one point during his 3.2 innings out of the bullpen. Y-D scored once in the seventh on an error, but left the bases loaded.

Two big bright spots for Y-D were Vaughn Mauterer and Shaun Gamelin. Mauterer inherited the mess in the first inning and worked out of it after allowing a hit. He followed that with two scoreless innings, and struck out five over 2.2 frames.

Gamelin entered a bases-loaded jam in the sixth and struck out two batters in a row to end the inning. He also pitched 2.2 innings with five strikeouts to keep Y-D within striking distance.

“We had a lot of guys banged up,” Pickler said. “We’re going to get them healthy and hopefully we can turn this around. I don’t care if we turn it around tomorrow, or the next day, or we do it in the playoffs.”

The Red Sox will try to turn it around Monday evening at Chatham, with first pitch set for 7 p..m.