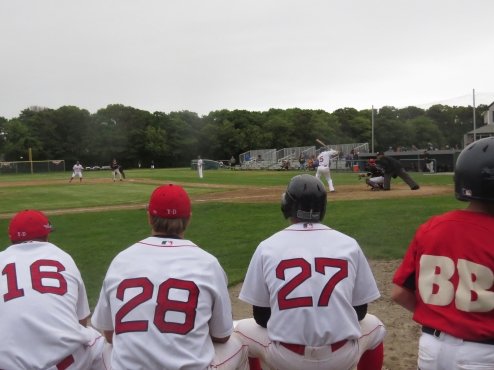 After a sweep of the Wareham Gatemen in Sunday?s doubleheader, the Yarmouth-Dennis Red Sox hoped to continue their winning ways on Tuesday against the Orleans Firebirds. Instead the Firebirds, behind four home runs and a solid outing from starting pitcher Trent Thornton (UNC), defeated the Red Sox 6-2 at Red Wilson Field.

Y-D got on the board first using small-ball in the top of the first inning. With two men on base, Jordan Tarsovich?s (VMI) sacrifice bunt moved the runners to second and third. A sacrifice fly from Michael Foster (Northeastern) scored Andrew Stevenson (LSU) to give the Red Sox an early lead.

The Red Sox bullpen, however, continued its early season success as Doug Willey (Franklin Pierce) and Josh Pierce (Kent State) allowed one run in the remaining six innings. Willey pitched four shutout innings, allowing only three hits and striking out four. Pierce allowed only one run on three hits, in two innings pitched. Through six games, the bullpen continues to be a bright spot for the Red Sox.

An impressive outing from Firebirds pitcher Trent Thornton (UNC) slowed Y-D?s offense throughout much of the game. The right-hander pitched five and a third innings, allowed only two runs on five hits, and struck out four. The Firebirds? bullpen would not allow the Red Sox to get anything going, as three different pitchers allowed no runs in three and two thirds innings of relief. Rob Fonseca (Northeastern) and Nico Giarratano (San Francisco) were the two bright spots for the Red Sox offense. Fonseca followed up his three-run home run on Sunday, by going 2-4 with a double. Giarratano went 2-4 as well, batting in the ninth spot of the order.

The Red Sox look to get back on track when they play the Chatham Anglers on Wednesday, June 18, 2014 at Red Wilson Field. First pitch is set for 5:00pm.