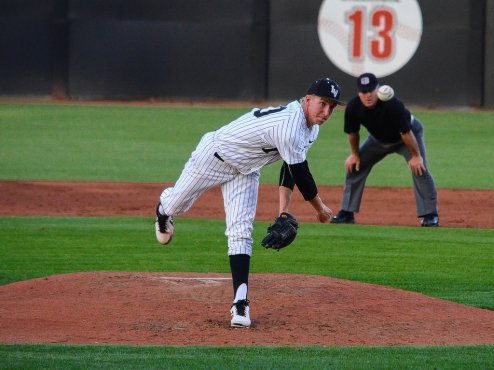 Erick Fedde (UNLV) threw 6 and 2/3 innings for the Yarmouth-Dennis Red Sox Wednesday and was the winning pitcher in a 2-0 defeat of the Bourne Braves. PHOTO: DANIEL WARD

The Yarmouth-Dennis Red Sox and Bourne Braves kicked off the 2013 Cape Cod Baseball League in pitcher?s dual fashion at Merrill ?Red? Wilson Field Wednesday night. YD came out on top with a 2-0 victory over the Braves.

Yarmouth-Dennis starting pitcher Erick Fedde threw 6.2 innings of one hit ball and picked up the win. Fedde struck out eight and didn?t walk anyone as he was lights out for Scott Pickler?s squad.

The Bourne Braves had more errors than hits as two mishaps by their shortstop Tim Caputo in the first and one in the fifth and sixth by their third baseman Vinny Sienna came back to haunt them. Braves starter Kyle Kubat settled down after a long first inning and threw six full innings allowing just two runs on two hits.

Yarmouth-Dennis reliever Dan Altavilla (Mercyhurst) came in with two outs in the seventh inning and finished off the game throwing 2.1 scoreless innings of relief, earning his first save of the season.

YD is on the road for the next three games starting tomorrow night as they travel to Harwich to face the Mariners. First pitch is set for 7:00pm.