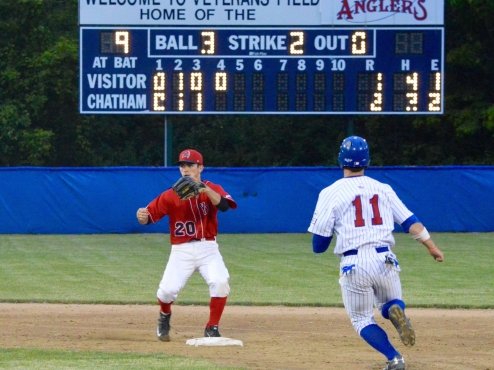 CHATHAM ? Unfortunately the 2015 Yarmouth-Dennis Red Sox (0-1) season started out in a similar fashion as 2014. Hopefully the season will end the same way as well ? hoisting a Cape Cod Baseball League championship trophy.

Opening the season on the road on a foggy, overcast evening at Veteran?s Field, the Red Sox stumbled out of the gates against the Chatham Anglers (1-0), losing 5-1 Wednesday evening.

Bailey pitched well enough to get a victory, however was a recipient of some tough-luck defensive errors up the middle by shortstop Connor Wong (Houston) ? to be expected, somewhat, given how little time these players have had to gel as a unit.

Y-D got the scoring started in the bottom of the second with left fielder Michael Donadio (St. John?s), in his second season with the team, scoring from third on a throwing error by Zeuch.

The Anglers answered in the bottom half of the inning with an RBI base-hit by second baseman Nate Mondou (Wake Forest), who swung a hot bat going 3-for-4, and never looked back. They scored runs in second, third, fourth and fifth innings off of Red Sox pitching.

Despite the loss to open the season, there were positives to take away from Veteran?s Field: like the offensive output from their two Cape League veterans. Donadio and centerfielder Stephen Wrenn (Georgia) combined for four of the team?s seven hits, while Wrenn showed off his range and speed in the field.

And then there?s 6-foot-3 side-winder Davis Tominaga (Portland). He stopped the Anglers? offensive attack in the sixth inning ? pitching three scoreless innings where he only allowed two Anglers to reach base. With a league made up of a Who?s-Who list of all-stars, Chatham hitters left the batter?s box asking ?who?? after facing the small-school pitcher?s herky-jerky delivery.

Stumbling out of the gates against is something manager Scott Pickler?s team is used to ? going 0-2 against Chatham and 3-6 on the road in June. He?s managed, however, to figure out how to get the most out of his players. And he?s got the hardware to prove it.

The Red Sox won?t have to wait long to bounce back into winning from. They face off against the Harwich Mariners at Red Wilson Field for the home opener tomorrow, Wednesday, June 10, at 5 p.m. EST.