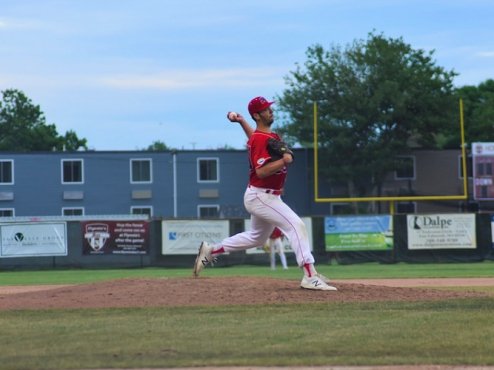 WAREHAM ? Chandler Fidel enjoys the extra time he?s granted for his pregame routine before taking the mound as a starting pitcher for the University of Arkansas Little Rock. On a team as talented as the Yarmouth-Dennis Red Sox though, Fidel knows he needs to be ready at a moment?s notice out of the bullpen.

?You gotta be ready,? Fidel said after Sunday?s 6-5 win over the Wareham Gatemen at Spillane Field. ?When you start, you have a little bit more time to get ready for the outing. When you?re out in the bullpen, you?re on a time limit. You need to get ready as quickly as possible. It?s definitely different, but its been working.?

Ready he was, as Fidel got warm quick and entered in the most pivotal moment of the game. After the Gatemen loaded the bases with two outs in the sixth, Coach Scott Pickler called upon Fidel to secure the final out of the inning and preserve the 5-4 lead.

It took just four pitches for Fidel to strike out Drew Millas (Missouri State) and end the Wareham threat.

Tommy Henry (Michigan) made his second start of the season for Y-D but struggled with his command for much of the evening. He walked three batters and allowed four hits in his three innings of work, resulting in four earned runs for the Gatemen.

The Red Sox bats were ready to back him up though, and Quin Cotton (Grand Canyon) was at the center of it all. After going hitless in his last five at-bats, Cotton picked up three hits and a walk, scoring two of Y-D?s six runs.

?It was a good challenge playing against Wareham tonight,? said Cotton after the win. ?It was good to come in, get some hits, score some runs, and keep the team in front.?

Reese Albert (Florida State) and Nick Quintana (Arizona) also had big days at the plate, as both knocked in two runs apiece. With a single hit in his three at-bats, Albert somehow saw his batting average drop to an even .400 for the season.

Trenton Denholm (UC Irvine) and Ryne Nelson (Oregon), along with Fidel, were spectacular out of the bullpen. Denholm pitched 2.2 innings and struck out four without allowing a run, and Nelson came on for the three-inning save.

The Red Sox will put their two-game winning streak on the line Tuesday, as they host the Brewster Whitecaps at Red Wilson Field for the first time this season. First pitch is scheduled for 5:00 p.m.