We hit the road to visit the Cotuit Kettleers 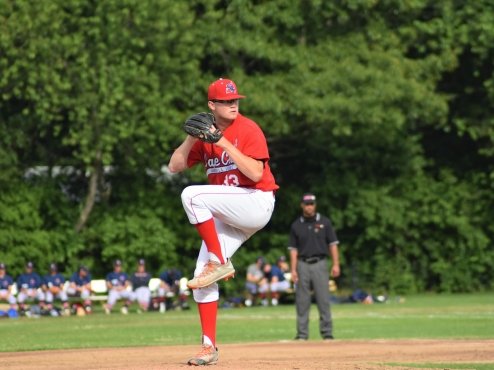 SOUTH YARMOUTH ? The Y-D Red Sox got back in the win column Saturday night with a 4-1 win over the Cotuit Kettleers.

Andrew Daschbach (Stanford) and Reese Albert (Florida State) got things started for Y-D in the first inning with back-to-back two-out hits. Daschbach doubled and Albert brought him home with a single.

Daschbach and Albert were right back in the thick of things in the bottom of the fourth inning. After fouling the first pitch of his second at-bat off, Andrew ?Smashbach? Daschbach smoked a John Baker (Ball State) offering over the left field fence to make the score 2-0.

?It always makes you more comfortable if you get one in that first AB,? Daschbach said after the game. ?Coach Pick was taking care of me in BP today, giving me some words of wisdom. But it definitely takes the pressure off, having good at-bats early on, and that opens you up a little later. It was fun today.?

Albert singled and came around to score on a Jonny Deluca (Oregon) single to make the score 3-0. Y-D added one more when none other than Daschbach came home on a single off the bat of Noah Campbell (South Carolina).

Daschbach finished the day 3-4 with 3 R, 1 RBI, and the HR in the fourth. Albert had multiple hits for the fourth consecutive game. His batting average is all the way up to .407 on the year.

In all but one of the team?s last nine games, Y-D pitching has allowed three earned runs or fewer. Saturday night?s effort was spearheaded by Jensen Elliott (Oklahoma State), who lowered his season ERA to 3.43 with a five-inning, one-run performance. He struck out three, walked none, and allowed five hits on the evening.

?I had good command of all three pitches, so that was nice to have,? Elliott said. ?A couple of the batters on their team did a good job of sitting on stuff and did what they should with [the slider]. I need to maybe mix it in a little bit more ? selection ? and it should continue to be good.?

Elliott improved his record to 2-1 with the victory. ?It?s always good to get back in the win column,? he remarked.

The tag team of Chandler Fidel (Arkansas?Little Rock), Sam Kessler (West Virginia), and Tristan Baker (Western Carolina) threw four scoreless innings of relief behind Elliott. The bullpen racked up seven strikeouts on the day to help vault Y-D into first place in team strikeouts, with 161. Baker picked up the two-inning save, his second save of the year, allowing just one hit and striking out three.

Andrew Daschbach?s fourth-inning home run. As if his double in the first inning was not enough, Daschbach smashed his third homer of the year over the left-field wall to make the score 2-0. Those two runs would be all Y-D needed to lock up the win over Cotuit.

The Red Sox are back in action Saturday evening at Wareham. The first pitch at Spillane Field is scheduled for 5:30 p.m.