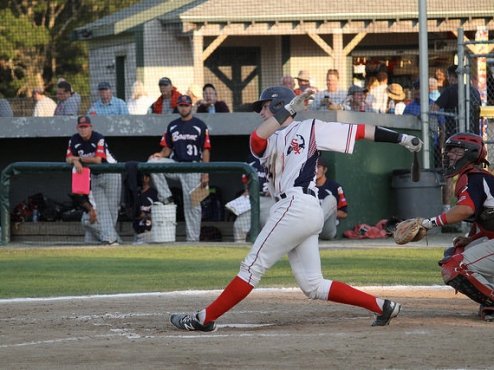 Darren Trainor slugged the ball high in the air towards the left field fence at Veteran?s field. The Chatham left-fielder sprinted towards the foul pole, but quickly ran out of room. Trainor proceeded to put his head down and trot around first-base. A stunned crowd didn?t know how to react as he veered off the baseline and started heading back to home plate.? That hit was the most explosive play he had made all season for the Red Sox and it didn?t count.?

?A ball goes that far you got to call it,? Christian Koss said. ?That?s a Home run.?

Since that play shook up the Red Sox dugout on July 25th, Darren Trainor is hitting a scorching .556 at the plate. He?s made strides both offensively and defensively which gave him the opportunity to assume the everyday catching role with Y-D.

?I?m just getting my feet wet,? Trainor said. ?It?s the best of the best out here on the Cape. I?m just trying to compete.?

Trainor has made impressive adjustments in his short time with the Red Sox. In his past seven games, he has raised his average from .067 to .250 showing no signs of cooling down.

Looking timid in the beginning and admittedly being tentative at times, he is starting to find his groove.? He now steps in the box and behind the dish with supreme confidence that begs for results.

Securing a home run in his second game against Chatham on July 28th, Trainor finally captured the offensive spark he sorely needed. Prior to the home run at ?Red? Wilson field, Trainor?s most notable play could?ve been an RBI groundout against Orleans which was paramount in securing an 8-7 walk off victory against Orleans in which Alfonso Rivas delivered the walk off blow.

?He?s starting to feel it,? Pickler said. ?He gives me game behind the plate, if I could get his swing right he?s going to help us down the stretch.?

Trainor is coming off an injury to his right elbow that required Tommy John surgery and kept him sidelined for the entire 2017 spring season. After Trainor made his first appearance behind the plate for the Red Sox, he was scheduled to go a second day in a row, but was a late scratch from the lineup making way for Mike Casala to get the start. After the game, Casala noted that Manager Scott Pickler was hesitant to catch Trainor in back to back games. But, after being constantly evaluated by the Red Sox team trainer, Pickler is confident in Trainor?s ability to go the distance in games.

Pickler, who had already liked to split games with his catchers back to when Dom DeRenzo and Kole Cottam where the team?s two main backstops, has already caught Trainor for the full game four times including a contest with Wareham that went to 11 innings.

In the last seven games, Trainor had a stretch in which started and caught for three straight games.? Pickler doesn?t seem to be bothered by the status of his arm any longer.

?Three game in a row isn?t a big deal,? Pickler said smiling. ?He may go four.?

Trainor says the consistent playing time that he?s been getting has been a tremendous aid to his development.? He said it has helped him add confidence which has given him the ability to perform on a big stage like the CCBL.

Early in the season Pickler spent a lot of time working one on one with Trainor during batting practice. He admits in the beginning he ?didn?t like his swing?, but says he?s a ?smart kid? and has made big adjustments to help improve his game.

On Monday against Bourne, Trainor had an impressive 2-3 day at the plate with two singles. Despite the solid contact, the most impressive play at the plate came on his last at bat where he worked a walk to first base.? He took a 3-2 pitch inside, but very close and without hesitating flipped his bat backward and trotted over to first base before the home plate umpire had a chance to even make the call. It was a fitting end to a strong game for Trainor, who makes the most of every at bat. Even when he walks.

?I?m working hard,? Trainor said. ?I?m not where I want to be yet, but I?m getting there.?