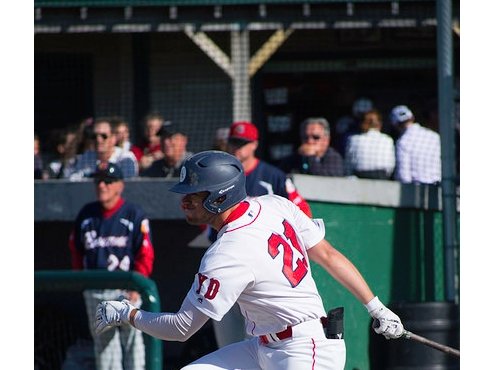 HARWICH ? Tristan Baker is a starting pitcher through and through. The 5?10? southpaw has started in 31 of his 39 appearances for the Catamounts of Western Carolina, but he may have found a new home in the bullpen on a crisp and chilly Friday night in Harwich.

Called on in relief of Red Sox starter Karl Kauffman (Michigan) to begin the sixth, Baker allowed just one batter to reach base while facing the minimum en route to a four-inning save in Y-D?s 4-1 win over the Harwich Mariners at Whitehouse Field.

?It felt great,? said Baker, who made his first Cape Cod League appearance Friday. ?My mechanics were working. I was getting on top of the ball, on top of the changeup. My slider was working pretty well. It just felt good to be out there. Just trying to survive you know??

Baker is one of many temporary players still trying to carve out a permanent role on the Y-D roster. But performances like Friday?s are sure to go a long way with Red Sox manager Scott Pickler.

?He came at hitters and located three pitches for strikes. It made it pretty easy for us,? said Pickler after the game.

While he didn?t have his best statistical season in 2018, Pickler received rave reviews on Baker from Catamount head coach Bobby Moranda.

?His coach really liked him at Western Carolina, said ?this kid?s got some bulldog in him,? and that?s what [Baker] showed me today,? said Pickler.

The Red Sox (2-1-1) took over first place with the win and are now the owners of the only positive run differential in the entire East Division.

Kauffman was sharp early, striking out the side in the second, but his command betrayed him as the game wore on. He issued five free passes and allowed two hits, but wasn?t charged with an earned run after a Charlie Concannon (St. Josephs) error at first base allowed Tanner Morris to reach safely.

Concannon made up for his miscue though, launching a clutch two-out single that scored Quin Cotton (Grand Canyon) and Taylor Young (Louisiana Tech) and proved to be the difference.

Stanford slugger Andrew Daschbach made his highly anticipated season debut Friday, batting clean up as the designated hitter. After arriving on the Cape a mere 12 hours before first pitch, Daschbach reached base twice, including an RBI double off the right-field fence.

?I thought he [Daschbach] had a good day,? said Pickler. ?It?s not easy coming up here, going to wood, flying all day yesterday, but we threw him right in.?

Micah Pries (Point Loma Nazarene) collected three hits Friday and is now hitting .429 on the season. The left-handed hitting sophomore has been another surprise find and he, along with Zach Ashford (Fresno St.) are hoping to extend their stay in South Yarmouth.

Play of the game:

Luke Waddell made an incredible diving stop on a line drive to his right to rob Andre Lipcius of a hit and end the fifth inning. Lipcius had the bases loaded and a chance to pull Harwich within one, but Waddell had other ideas.