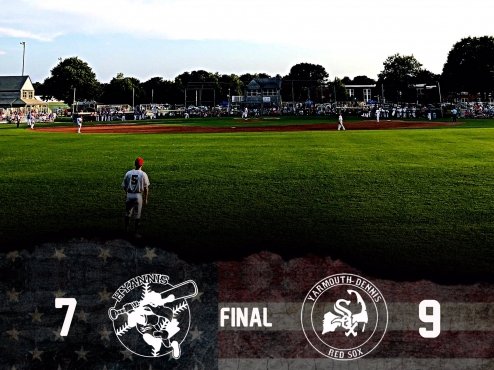 SOUTH YARMOUTH ? They didn?t pummel the Hyannis Harbor Hawks 13-1 like they did Wednesday night, but the Yarmouth-Dennis Red Sox proved their ability to play as a team and perform in high-pressure situations Thursday evening as they took down the Harbor Hawks 9-7.

Pitching has been the Achilles heel for the 3-15-1 Harbor Hawks all season, and the Red Sox showed no mercy. Four different starters in the Y-D lineup had a multi-hit game. Leadoff hitter Wyatt Young (Pepperdine) went 3-5 with two runs and one RBI. The shortstop leads the Cape League with a .400 batting average. Austin Wells (Arizona) had a multi-hit performance for the third game in a row, going 2-4 with two RBIs and one walk. He leads the league in RBIs at 17 and is fifth in batting average at .338. Noah Campbell (South Carolina Columbia), who hit over .350 last summer for the Red Sox, is batting .333 after a 2-4 performance. Jack-Thomas Wold (UNLV), Brad Beesley (Cal Poly San Luis Obispo), and Jake Palmer (UC Irvine) all had productive days at the plate as well.

The Y-D pitching staff didn?t have as successful of an evening as the offense, but Ledgend Smith (Oklahoma) gave up no hits and no runs in 0.2 innings to get the win. Ryan Hare (UNLV) made his debut for the Red Sox, striking out two and giving up six hits, two earned runs, and three walks in 3.1 innings of work.

For the second night in a row, the Red Sox offense wasted no time getting on the board. Young led off the bottom of the first inning with a bunt single popped up over the Hyannis pitcher?s head. Campbell singled into left field, and Wells collected his 16th RBI with a base hit into right field.

The Harbor Hawks struck back in the top of the third inning with a solo shot to dead center. They made it a 4-2 game in the fourth inning off of three hits, one walk, and a wild pitch.

Y-D retook the lead in the bottom of the fifth inning, beginning with a 3-2 walk drawn by Campbell. Riley King (Georgia) then hit a chopper through the 5-6 hole to advance Campbell to third for Wolt, who ripped a liner down the left field line to score two runs. Beesley drew a walk, Palmer hit a long fly ball into center to allow Wolt to tag up and advance to third, and Erik Tolman (ASU) ? the two-way player who went yard the night before ? hit a grounder to the Hyannis shortstop that the first baseman mishandled, allowing Wolt to cross home plate.

The Red Sox lost the lead on two hits and one error in the top of the seventh inning, but this Y-D team has displayed heart and composure all summer, and did so once again in the bottom half of the inning. Beesley smoked his first round-tripper of the summer to make it a tie ballgame. After working a 3-1 count, Campbell ripped an RBI single into left field to give the Red Sox an 8-7 lead. Wells then earned his 17th RBI of the season on a base hit roped into right-center. Following Wells? at-bat, the umpires agreed to call the game due to darkness. Because the Red Sox had the lead both in the fifth inning and in the seventh, the score did not revert back to 5-4.

The Red Sox are now tied with the Chatham Anglers for first place in the East Division, and have a chance to take sole possession of first place against the Brewster Whitecaps tonight at Stony Brook Field. First pitch is set for 5 p.m.

Who should be an All-Star?

The 2019 Cape Cod Baseball League All-Star Game in Orleans is over two weeks away, but since All-Star selections will be announced next weekend, it?s a good time to start thinking about which Red Sox should at least be considered.

Wyatt Young (SS): Young arrived on the Cape as a temporary player but performed so well that Red Sox Manager Scott Pickler had no choice but to keep him around. Young has sparkled at shortstop in the absence Team USA member Luke Waddell, and he leads the league with a .400 batting average in 50 at-bats. He is second on the team ? behind Wells ? in hits and runs. Young has been nothing short of exceptional and absolutely deserves to make the trip to Eldredge Park as an All-Star.

Austin Wells (C/OF): Wells was named a five-time First-Team Freshmen All-American and the Pac-12 Freshman of the Year for the Arizona Wildcats this spring. He leads the Red Sox in almost every offensive category and has played solid defense in multiple different positions. He is currently hitting .338 with 15 runs, four doubles, five home runs, 17 RBIs, 11 walks, and six stolen bases. Watching Wells play the game of baseball is a treat, and there is no way he won?t be named an All-Star in the next week or so.

Noah Campbell (DH/OF/2B): Campbell has been on a tear lately, hitting .333 in 38 at-bats with two home runs, 10 runs, seven RBIs, nine walks, and five stolen bases. If he continues to be clutch at the top of the lineup this week for Y-D, it?s possible that he will be named an All-Star.

Taylor Dollard (RHP): The Cal Poly San Luis Obispo pitcher has been phenomenal on the bump for the Red Sox. He?s struck out 14 batters in 8.1 innings of work, and has yet to give up a single run. He?s only given up three hits in five games.

Chase Smith (RHP): The Pittsburgh pitcher has a 1.22 ERA with seven strikeouts in 7.1 innings pitched.