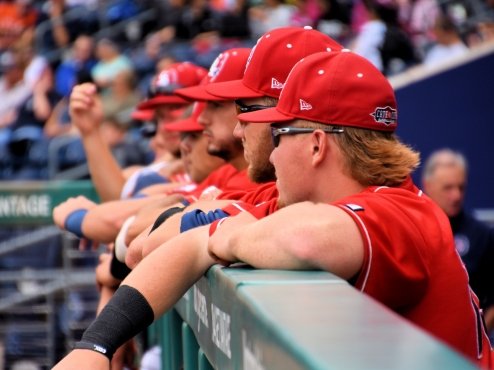 SOUTH YARMOUTH ? In a battle for sole possession of first place in the East Division, the Chatham Anglers? pitching staff stifled the Yarmouth-Dennis Red Sox yet again, allowing just two hits and no runs. The Y-D pitching staff fell behind batters, walking nine and giving up six hits. The 5-0 loss puts the Red Sox back in second place and raises questions about how they will fare in the upcoming playoffs.

Through five matchups with the Anglers, the Red Sox have scored just seven times. Not a single player in the Chatham lineup yesterday is hitting above .300, but their pitching staff ranks second in the league statistically with a 3.38 ERA. Y-D, on the other hand, has the second-worst ERA at 4.69. If the Red Sox want to make a playoff run in just over a week, their starting pitchers are going to need to bring their A game, the bullpen must get sharper, and the offense needs to be more consistent. Y-D boasts the second-best offense in the league ? with four guys in yesterday?s lineup hitting above .300 ? but didn?t get a single baserunner past second base yesterday until the eighth inning, when Noah Cardenas (UCLA) walked, advanced to second on a wild pitch, and tagged on a flyout by Brad Beesley (Cal Poly San Luis Obispo).

The only Red Sox to record a hit were Cardenas ? who roped a double to the left-center wall in the bottom of the third inning ? and Beesley ? who hit a screamer up the middle in the first. Wyatt Young (Pepperdine), Austin Wells (Arizona), Jake Palmer (UC Irvine), Ron Washington (Pittsburgh), and Cardenas each drew a walk. The Red Sox struck out seven times, and the lefties in the lineup rolled over bad ? Chatham second baseman Heuston Morrill (Oklahoma State) recorded six assists and five putouts in the game.

Ryan Hare (UNLV) didn?t have a poor start for the Red Sox, but he threw too many pitches. Instead of attacking hitters with his fastball, he often fell behind batters. He struck out three and gave up two hits, one run, and four walks in 3.2 innings of work to get the loss. Cullen Kafka (Oregon) took over in the fourth inning and gave up four runs on three hits and three walks in 2.2 innings. Brady Corrigan (Arizona State) struck out one batter and gave up one hit and two walks in 0.1 innings. Jacob Winger (High Point) and Michael Weisberg (Cal State Fullerton) each had an excellent performance, giving up no hits and no runs in the last two innings of the game. Winger struck out four and now has an ERA of 1.25 with 18 strikeouts and just four walks in 14.1 innings of work.

Luckily for the Red Sox, they have a chance to bounce back and potentially get their first win against the Anglers tonight at Veteran?s Field. Because Chatham regained power yesterday afternoon, first pitch will be at 7 p.m. as originally scheduled.

Newbies in the Bullpen: The departures of Ian Seymour (Virginia Tech), Jack Leftwich (Florida), and Taylor Dollard (Cal Poly San Luis Obispo) leave a major hole in the Y-D bullpen, but Red Sox Manager Scott Pickler brought in two new faces this week: Mark DiLuia (Maryland) and Nolan McCarthy (Occidental). DiLuia ? who is predicted to get the start today for the Red Sox ? appeared in 14 games with 12 starts for the Terrapins in 2018. He recorded a 5.62 ERA with 47 strikeouts in 65.2 innings of work. This spring he recorded a 5.45 ERA with 38 strikeouts in 38 innings. McCarthy is the only Division III player on the roster, but he looks and plays like a Division I pitcher at 6?5?. He recorded a 1.74 ERA for the Tigers this spring with a 9-3 record and 98 strikeouts in 98 innings pitched.