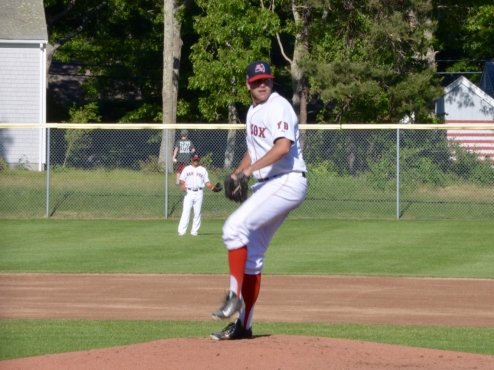 It was a perfect night for baseball, as there wasn?t a cloud in the sky on the first pitch of the game.

The starters for both clubs were nothing short of impressive. Pat Vanderslice (Saint Joseph?s) was on the bump for the Red Sox, while Tom Cosgrove (Manhattan) was on the hill for the Anglers.

Vanderslice started off the game giving up a leadoff homerun to DJ Artis (Liberty). He then settled down, retiring a spectacular 17 straight batters, striking out five of them. Dylan Woods was charged with an error in the sixth, ending the streak. It was the first time Vanderslice pitched from the stretch all game. He then gave up a three-run homerun to Patrick Mathis. After the homerun, his night was done, going 5.2 innings. Despite the great performance, Vanderslice was charged with the loss.

Cosgrove started off by going three scoreless innings. He got into some trouble in the fourth, as the Red Sox got two on with no outs. Luke Miller (Indiana) laid down a nice bunt to move the runners over. Then Brendan Skidmore (Binghamton) hit a grounder to third as Matt Vernon (Appalachian) was charged with an error, knocking Matt Whatley (Oral Roberts) in from third.

Cosgrove was taken out in the sixth, going 5.2 innings, after an RBI double by Skidmore. This closed the deficit to two for Y-D. After a Matt Winaker (Stanford) bases loaded walk, the Red Sox were within one.

They then stranded the bases loaded in the sixth.

Chatham was able to hold Y-D for the rest of the game, ending with a tight score of 4-3.

Tomorrow night Y-D plays Falmouth at Red Wilson Field at 5 p.m. This is the makeup game from Saturday, June 11 which was rained out.