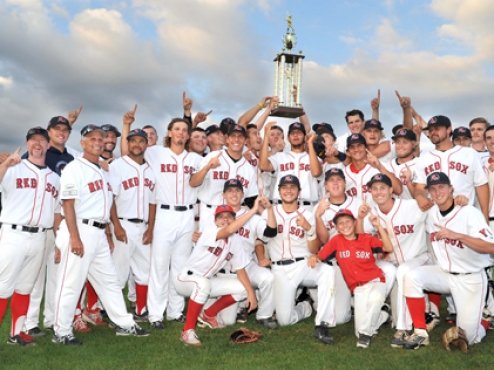 SOUTH YARMOUTH ? The adjustment to the Cape Cod Baseball League goes far beyond the field. Of course there?s the grind of games on a nightly basis, transitioning from the ping of the aluminum bat to the subdued sound of maple or ash and the seemingly never-ending list of all-star caliber talents faced.

But then there?s getting to know the brand-new environment you?ve been thrown into: adjusting to an unknown family after living in a college setting, being away from your family and fitting in with your peers. Even something as simple as figuring out how to get to the ballpark or where to eat on a twenty-something?s budget can be difficult. Yet every single one of these players are asked to not only do all of the above, but perform at a high level night-in and night-out.

These are things Y-D outfielders Stephen Wrenn and Michael Donadio faced last year in their inaugural seasons in the Cape League ? Wrenn with the President?s Trophy-winning Bourne Braves and Donadio with Y-D.rnrnNow in their second season on the Cape, Wrenn and Donadio appear relaxed and confident ? both on and off the field ? and are eager to share their trial-run experience of the 2014 season with this year?s crop of new players as the lone veterans on this Red Sox team.

“Yeah I think I?m a leader,? Wrenn said before Wednesday?s 4-2 loss to Harwich. ?Experience is a huge factor in this league. I?m constantly telling the younger guys here, ?Hey don?t press, just let it happen and trust yourself,??.

?In college it?s easier to be the superstar, here is a lot more humbling,? Wrenn said.

Donadio, entering his junior season at St. John?s University, echoes Wrenn?s words to the newcomers of the Red Sox.

?I think the biggest thing the younger guys can learn from me is to have a steady approach and stick with what got you here in the first place,? he said Wednesday.

Donadio played in considerably less games ? 12 total, including the playoffs ? but was a key cog in the championship-winning lineup for the Red Sox; batting .367 with two homers and 11 hits in eight games.

And although early, their impression on the 2015 Red Sox lineup has been felt. Through two games the veteran pair have combined for seven of the team?s 13 hits, combined for a robust 1.125 OPS (on-base percentage + slugging percentage) and have accounted for all of the team?s three runs. Wrenn serves as the team?s table-setter in the lead-off spot while Donadio has found an early home in the line-up as a clean-up hitter.

Wrenn, who?s batting .375 with a homer, credits a renewed sense of relaxation at the plate as well a quiet confidence that exudes from his play rather than his mouth.

?The biggest thing is how to handle the game, how to pace myself a bit and not try to sprint a marathon,? he said.

Donadio, equally as quiet off the field, stressed a consistent, competitive approach to the game and hopefully that doesn?t lead to any extended slumps and, hopefully, leads to the opportunity of hoisting another championship trophy.

?The one thing I tell these guys is I want to make it another championship year. It?s a long summer, but that?s what we?re all here for. And no matter how you do [individually], it?s all good at that moment.?