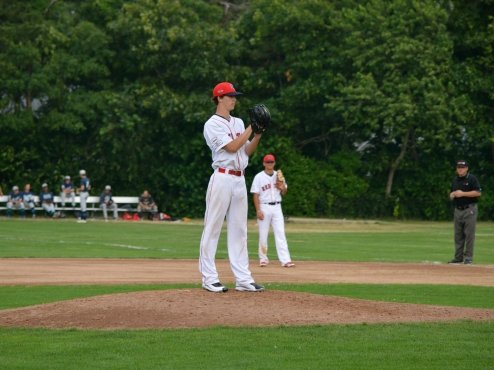 Walker Buehler (Vanderbilt) led the Red Sox to a 3-1 victory over the Brewster Whitecaps. Photo by Kyra McDonald/Y-D Red Sox

SOUTH YARMOUTH, Mass. ? The Yarmouth-Dennis Red Sox are another win closer to .500 with their win over the Brewster Whitecaps on Wednesday night. Y-D scored just three runs on seven hits but it was enough to overtake the Whitecaps.

Walker Buehler (Vanderbilt) got the win for the Red Sox in his first Cape league start. Buehler pitched five innings, only allowing one run. He struck out two and surrendered six hits. Brewster?s Zach Morris (University of Maryland) was charged with his first loss of the year. He lasted just three innings, walking three and allowing two runs.

Going into the bottom of the fourth inning, the game remained scoreless. But a two-run homerun from Jesse Jenner (University of San Diego) would give Y-D the 2-0 lead. Jenner said that, ?Tacking on a lead really helped us out. I just tried to give Walker a little bit more support.? ?Newly acquired Jenner went 3 for 4 in the game, along with the fourth inning homerun, he also singled in the second and eighth inning.

Brewster wouldn?t take long to answer back as Georgie Salem (Alabama) hit an RBI single in the top of the fifth inning, allowing Josh Vidales (Houston) to score the Whitecaps? first and final run of the game.

Y-D?s Andrew Stevenson (LSU) would tack on another run for the Red Sox in the bottom of the fifth inning to increase the lead to 3-1. Stevenson ripped an RBI double off the center field fence allowing Jordan Tarsovich (VMI) to score. Speedy Stevenson showed off his skills in tonight?s game, as he stole three bases, brininging his season total to 14 stolen bases.