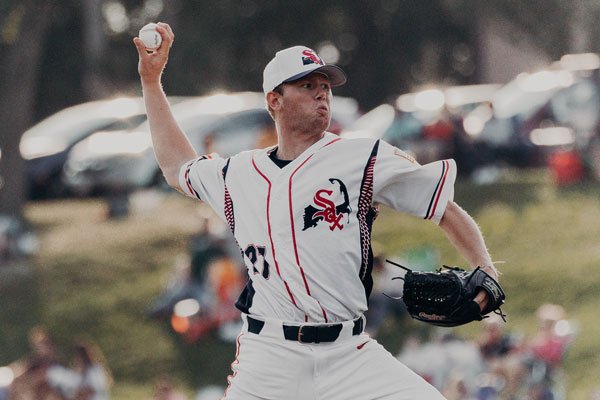 It was a pitcher’s duel on a windy Friday night at Eldredge Park, as the Yarmouth-Dennis Red Sox got a masterful start from Bryce Robison, who pitched six shutout innings. Y-D rode his start most of the way, then broke the game open in the top of the eighth on their way to a 4-0 win over the Orleans Firebirds.

The win improved Y-D’s record to 11-5-2, and granted the Red Sox a five-point lead in the East Division as Brewster tied, 0-0, against Falmouth. It was Y-D’s seventh win in their last eight games.

On the mound, BYU’s Bryce Robison showed off strong control of his changeup, using the pitch to generate swings and misses. He struck out three, allowed just four hits, and walked two Orleans batters.

“I thought that was [Robison’s] best game of the season for us,” Pickler said.

Behind Robison, the Sox defense worked some magic. The middle infielders turned two double plays and added a third behind Luke Jewett later. On the second double play, shortstop Hunter Haas snared a one-hopper and threw to second in time to catch Orleans’ Luke Keaschall, who was running on the pitch. Chase Meidroth applied the turn, and it got Robison out of the sixth inning.

“It feels good to know that you’ve got guys that can play behind you,” Robison said. “[Haas] helped out a lot in this game. That double play was huge.”

Haas helped out on the offensive side as well, being the only player for either team to record multiple hits. He scored Y-D’s second run in the sixth inning on a Jonny Long groundout after his leadoff double.

Robison even joined in on the defensive fun, snaring a liner hit straight at him with a lightning-quick reaction in the sixth.

Offensively, the Red Sox were forced to manufacture runs. The Sox went to small ball, using sacrifice bunts and moving runners over station to station. Y-D brought three runs across on RBI groundouts and another on a wild pitch.

“That’s what this league is about,” Pickler said. “Most games are really tight. You’re not playing for yourselves, you’re playing for the team.”

The Orleans pitching staff, led by starter Kyle Carr, held Y-D to just six hits. But with unselfish players looking to move baserunners along rather than trying for their own glory, the Red Sox produced the only offense of the night.

Jewett entered for the Red Sox in the top of the seventh and made some more magic by kickstarting a double play. The UCLA right-hander earned the save with three shutout innings, allowing just two hits and striking out two. Pickler hailed Jewett’s “outstanding” performance in relief.

“He was in total control,” Pickler said.

The shutout lowered the Y-D staff ERA to 1.87, good for second in the league. The Sox have given up more than one run just once in their last six games.

“We’re having fun,” Robison said. “To me, that’s all that matters.”

The Sox will hope the fun continues Saturday against Wareham, with first pitch set for 5 p.m. at Red Wilson Field.