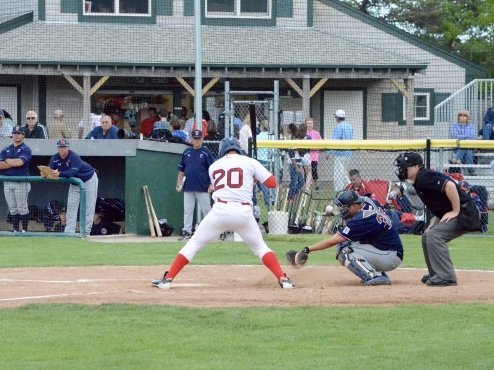 BREWSTER, Mass. ? Despite the tremendous effort at the plate by Deon Stafford Jr. (Saint Joseph?s), the Yarmouth-Dennis Red Sox fell to the Brewster Whitecaps, 11-6 Sunday evening.

Stafford went 2-for-4 with a three-run homerun and an RBI double. He got the offense started as the Red Sox bats were quiet through the first five innings. They scored four runs in the sixth and two in the seventh. However, they were shutout for the last two.

In contrast, the Whitecaps wasted no time and put one on the board in the first inning. They came out swinging in the second inning, scoring five runs. These two innings plus a two-run homerun by Ryan Noda (Cincinnati) in the fifth proved to be too much for the Red Sox.

It was an offensive game as there was a total of 21 hits between both clubs.

Michael Bauman (Jacksonville) got the start for Y-D, pitching for two innings, and picking up his first loss. Aaron Sotto (Tennessee) was on the bump for Brewster, throwing for six innings, and got his first win of the summer season.

The Red Sox face off against the Harwich Mariners Monday at Whitehouse Field. The first pitch will be thrown at 6:30 p.m.