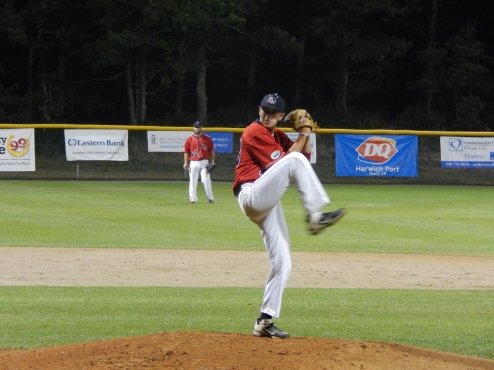 The Yarmouth-Dennis Red Sox dropped a frustrating game on Tuesday night to the Bourne Braves, 2-1.? Jordan Minch made his third start on the summer and was lights out for seven innings of one run ball.

Both teams were shut out for the first six innings until Max Pentecost hit an inside-the-park home run to give Bourne a 1-0 lead. Y-D came right back in the bottom half of the sixth and tied it up 1-1 on a fielder?s choice ground ball by DJ Stewart. It was Stewart?s 23rd RBI of the summer.

Michael Costello made his first start for Bourne and was on a pitch count of 50 pitches. He threw five innings of three hit ball and didn?t allow a run.

Both teams had solid efforts out of the pen up until the top of the ninth inning, when Bourne pushed a run across to take a 2-1 lead. Max Pentecost was on third when Wayne Taylor threw a ball into left field trying to pick off Pentecost. That was the only insurance that Clint Freeman would need as he came on for the save as Bourne went on to win 2-1.

The Sox travel to Chatham tomorrow night to take on the first place A?s. First pitch is set for 7pm.