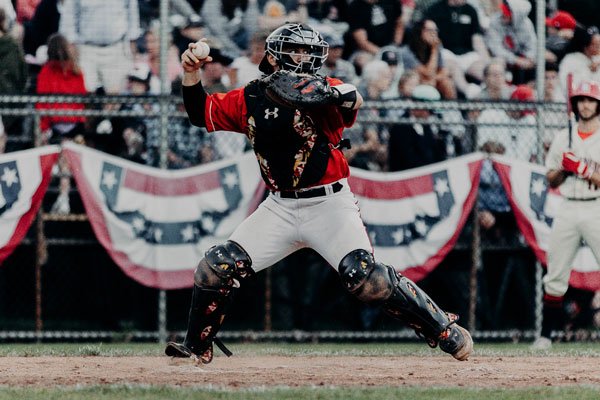 Most catchers don’t hit in the leadoff spot. The prototypical build for a leadoff man — fast, offensively-minded, an on-base machine — is hard for a catcher to match with the defensive burdens of playing behind the plate.

But most catchers aren’t Luke Shliger.

The University of Maryland backstop is one of the most unique players in the country. Shliger has such strong knowledge of the strike zone that he can get on base seemingly at will. He rarely chases a pitch outside the zone, and is patient enough to hold off on borderline pitches. He has enough speed to swipe bases and keep pitchers on their toes. And his mastery of the strike zone is enhanced by playing the position closest to it.

As the game wears on, Shliger learns what the umpire’s established zone is. While this is useful defensively, it’s also something he has found to be a huge boost at the plate.

“I use my defense to help my offense,” Shliger said. “Once I have a bearing on what the ump is calling, that helps me. I try to feel the umps out behind the plate, and that helps offensively because I know what he’s calling and I know what he’s not calling.”

As Shliger understands how certain pitches are being called — and understands the umpire’s personal strike zone — he can use that to find all kinds of ways to get on base.

Shliger’s .492 on-base percentage this spring was top-25 in the country, locking down the leadoff spot all season for the Terrapins. His 54 walks ranked 13th in the NCAA. Even his 20 hit-by-pitches were tied for 22nd in the nation.

Add those to his .353 batting average this spring, and Shliger is a tough out at the top of the order. The 5’9 catcher also has pop from the leadoff spot, with 12 homers and 36 extra-base hits.

No matter how, Shliger finds a way on base. He doesn’t care which way it comes.

“I don’t care if it’s a hit, a booted ball, an error,” Shliger said with a laugh. “Whatever I can get on base with.”

At the plate, Shliger’s eye stands out. He’s a patient hitter who works to get his timing down during his at bats. As soon as he’s on time, Shliger says the zone is under his control.

This summer, Shliger is suiting up behind the plate with the Yarmouth-Dennis Red Sox. Through 15 games, he’s earned a .420 OBP against some of the best college pitchers in the country. In his first six games with Yarmouth-Dennis this summer, Shliger walked eight times. While that rate has slowed down as of late, the inimitable catcher finds whatever way he can to get on base.

“I definitely adapted my role this year at Maryland, and coming into the summer, I know my role for these guys,” Shliger said. “There’s a lot of good hitters in this lineup, and getting on base for them helps us win games.”

Shliger’s at bats have been so effective through the start of the summer that Y-D field manager Scott Pickler continuously tries to get him in the lineup. On days where he isn’t starting behind the plate, he’s pinch hit and ran, played DH, and even cameoed in left field.

“I really like him,” Pickler said. “He’s got a really good eye, and he makes things go for us.”

That checks off one part of the prototypical leadoff build, but what about the speed? Shliger stole 14 bases this past spring at Maryland, and has already swiped two in two attempts for Y-D this summer. Pickler consistently brings him in to pinch run if he’s on the bench, whether it’s for a fellow catcher or not. His speed and awareness on the bases is an added bonus, particularly since he can slot right back behind the plate after pinch running.

Steals, while not an integral part of Shliger’s game, do play an important role. After finding a way to get on base, he’ll do whatever it takes to move up to scoring position.

“My theory is if I’m on base, I give my team a chance to win,” Shliger said. “Anytime I’m on base, I can try and look for a dirt ball or a stolen base and get to second. Then I’m in scoring position to get knocked in.”

Defensively, catching requires a player to know the traditional strike zone by heart, and to pick up on the umpire’s zone as soon as possible. A catcher needs to adapt to how an umpire is calling the game. If the ump is calling strikes just below the zone, Shliger needs to be able to frame pitches to gain that low strike. In that scenario, Shliger works under the ball to frame it while working up through the zone, a method he’s found he uses often.

“The game is all about adjustments,” Shliger said. “If he’s giving you the bottom of the zone, you’re definitely working under. If he’s giving you more off the plate, you can work your way back into the zone as you’re catching it.”

With his offensive and defensive skill set on top of his sparkling numbers from this past spring, Shliger is a talent to watch on the Cape this summer — and there aren’t many others like him.