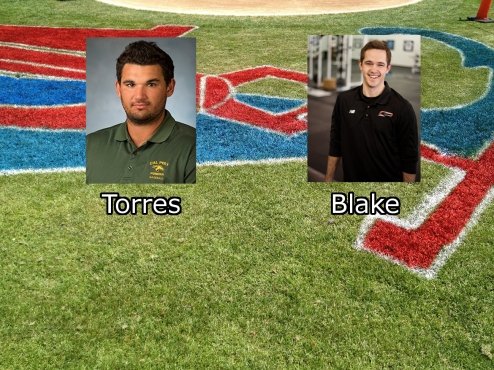 Both assistants have been brought aboard as the Red Sox prepare to defend their 2014 Cape Cod Baseball League Championship title.

Blake is a 2007 graduate of Holy Cross, where he was a four-year letterwinner with the Crusaders. In conjunction with his company, Elite Pitching Development, he is also the Pitching Coordinator for Cressey Sports Performance?s Elite Baseball Development Program. This collaboration allows Blake and Cressey Sports Performance to manage the off-season throwing programs for over 100 professional, college and high school players each year.

The Concord, N.H. native has been the pitching coach at Lincoln-Sudbury (Mass.) Regional High School since 2009. Additionally, he maintains a role as an Associate Scout for the New York Yankees in the Northeast region, where he has aided in the selection and coaching of the Northeast Yankees Area Code team since 2011.

Torres has served as an assistant coach at Cal Poly Pomona, his alma mater, for three seasons. Originally from Valencia, Calif., he put together an impressive playing career at CPP while quickly becoming the West Region?s top catcher at the NCAA Division II level. He received All-West Region honors in three of his four years as a student-athlete with the Broncos.

In the 2012 season, Torres led the Broncos in homeruns (8), on-base percentage (.431) and slugging percentage (.503). He excelled defensively behind the plate as well, tallying a fielding mark of .992. With eight homers in 2012, he pushed his career total to 34, becoming the program?s all-time leader. He graduated from CPP in June 2012.

The Red Sox open the season at Chatham on Tuesday, June 9. First pitch is scheduled for 7 p.m. from Veteran?s Field.