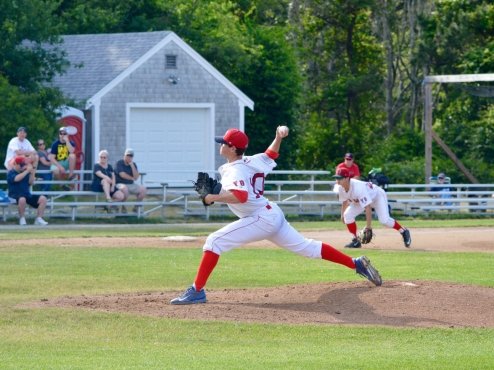 HARWICH, Mass. ? The Yarmouth-Dennis Red Sox (7-8) extended their win streak to four games with a 5-0 win over the Harwich Mariners (8-6-1) on Friday night at Whitehouse Field.

The Red Sox hit in the double-digits for just the third time this season. Four Sox players had multi-hit games including newcomer Mike Papierski (LSU) and Cole Billingsley (South Alabama), who went 3-for-5 including a triple.

The Y-D pitching and defense was just as important as their explosive offense. The Red Sox pitchers had five 1-2-3 innings and didn?t allow a single run.

After early-season struggles in the infield, the Red Sox have only had one error in their four-game winning streak. ?(We needed to) just get used to the surface and play with more confidence. It helps that we?ve getting closer because we can depend on everyone else,? said first baseman Ryan Noda (Cincinnati).

Shane Bieber (Calif. Berkeley) started on the mound for the Red Sox, his second start of the season, went 7.2 innings, only allowing four hits and no runs. Doug Willey (Franklin Pierce) took over for Bieber in the eighth inning and finished the game easily, retiring all four of the batters he faced.

New additions Papierski and Luke Bonfield (Arkansas) both had huge impacts on the win in Harwich. Bonfield, playing DH, went 2-for-3 with one run and one RBI. Papierski went 2-for-4 and added another run.

The Red Sox dugout is excited about what these new players, also including Gio Brusa (Pacific), are bringing to the team. Noda said, ?They bring character. They?re all good guys and they all know how to play baseball.?

The Red Sox will look to continue their win streak and hit .500 for the first time this season tomorrow at 7 p.m. against the Wareham Gatesmen at Spillane Field.