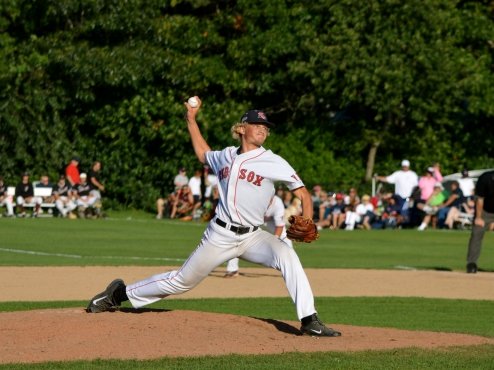 A rising sophomore, Bickford was drafted 10th overall by Toronto out of high school before choosing to attend Fullerton.

He made 14 regular season appearances for the Yarmouth-Dennis Red Sox in 2014, posted a league-leading eight saves and struck out 33 over 20 innings of work, allowing only five runs. He also earned a win in relief at Chatham on July 17, when Y-D scored three runs in the ninth inning to secure a 6-3 victory.

He shined again in the post-season, earning a save in each of his three appearances, which also stood as Y-D?s three series clinching wins.

Originally from Newbury Park, Calif., Bickford was an East Division All-Star and struck out the only batter he faced in the Friendly?s Cape League All-Star Game in July. His performance there and throughout the regular season earned him league-wide honors as the Robert A. McNeese Outstanding Pro Prospect and as a co-recipient of the Russ Ford Outstanding Relief Pitcher Award.