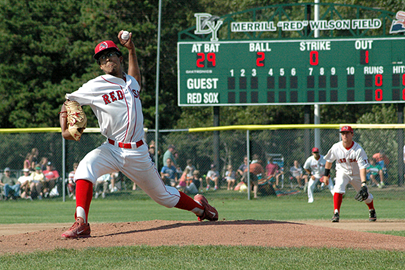 In this article, I’ll be taking a look at some of the best pitching seasons in Y-D Red Sox history since 2009, when all statistics began getting tracked.

In 2009, The 6 foot 6 left-hander from Florida Gulf Coast University took his talents to the Cape and put up one of the most impressive pitching seasons in YD history. In 7 Starts, Sale went 4-2 with a miniscule 1.34 ERA and a 0.82 WHIP in 47 innings. Every 5th day, Sale showcased his propensity to make batters look silly, allowing only 32 hits and striking out 47 batters across 47 innings. In more than half of his starts, Sale allowed zero runs, and was able to pitch deep into games going 6 or more innings in every start. His best performance of the year came in his second start of the season against the Brewster Whitecaps, where he gave up no runs, 2 hits and struck out a season high 12 batters in a season high 8 innings pitched. For his performance, Sale was named the most outstanding pitcher of the Cape Cod League during the 2009 season. The next year, Sale was drafted in the first round, 13th overall by the Chicago White Sox. Since then, Sale has enjoyed an illustrious career, making seven all-star game appearances, and finishing in the top 5 of CY Young award voting six times. Sale led the Boston Red Sox to a 108-54 record and a World Series Championship in 2018, and has gone 4-0 with a 2.40 ERA across 6 starts since rejoining the rotation this summer.

The 2011 YD Red-Sox rotation was anchored by Aaron Blair, a 6 foot 5 righty from Marshall University. Blair came out of the gates red hot, winning Cape pitcher of the week for the first two weeks of the season. During the regular season, Blair made eight appearances, six of those being starts. He dazzled with a 1.17 ERA and a 1.02 WHIP, winning all six of his starts. All season, Blair showcased his elite stuff, striking out 44 batters across 38.1 innings. In the playoffs, Blair continued his dominance, giving up just one run in two starts. In his final start of the season, Blair took the ball for YD facing elimination against Wareham. With their backs against the wall, Blair was not phased, striking out 10 batters across 7 shutout innings, sending YD to a game three. Playoffs included, Blair went 8-0 with a 1.05 ERA in 51.1 innings, with 22 walks and 60 strikeouts. The following year, he was selected 36th overall in the 2013 MLB Draft by the Arizona Diamondbacks. Blair was later traded to the Atlanta Braves where he made his debut in 2016, but hasn’t pitched in the league since 2017.

One of the most impressive pitching seasons in recent YD Red-Sox history came from left-handed relief pitcher Ben Bowden during the 2015 season. In the regular season, Bowden made 10 appearances out of the bullpen, pitching 17.1 scoreless innings, giving up only five hits and striking out 31.

In the postseason, Bowden continued his quest for a perfect season but came up short,  giving up his lone run of the year on a RBI Single to current Baltimore Orioles outfielder Austin Hays, during his last appearance of the year in which he would pitch the final three innings enroute to YD’s second straight league championship. Overall, Bowden gave up just one run in 30 innings during the regular season and playoffs combined, striking out 12.9 batters per 9 innings and giving up just 11 hits. He also held opponents to a .088 batting average. Following his year on the Cape, Bowden was selected in the 2nd round of the 2016 draft by the Colorado Rockies, a very high selection for a reliever. He made his debut this year, where he has struck out 10.5 batters per 9 innings.

While Bowden anchored the bullpen for the 2015 Red Sox team, it was Ricky Tyler Thomas who led the rotation. Across seven starts and one relief appearance during the regular season, Thomas went 7-0 with a sparkling 1.01 ERA and 45 strikeouts in 44.1 innings. For his performance, Thomas was named a member of the all-star team, where he pitched a scoreless inning. During the championship run, Thomas won both of his playoff starts, giving up two runs in 13.2 innings. Thomas led the Sox in innings pitched, strikeouts, wins, and starting pitcher ERA. Following his career at Fresno State, he was drafted in the 7th round by the Texas Rangers. The 25 year old is currently playing in the Rangers’ minor league system, recently debuting at the AAA level.

In 2018, relief pitcher Trenton Denholm from the University of Califorina-Irvine completed a feat that Ben Bowden came one hit away from achieving three seasons prior: a perfect season. Although he did not start any games, Denholm served as a long reliever, making multiple inning appearances every game he pitched. In nine games during the regular season, Denholm pitched 21.2 scoreless innings, giving up just 14 hits and striking out 29 batters, holding opponents to a .184 batting average. Denholm added a scoreless inning in the all-star game before making his lone, and possibly best appearance of the year in a playoff game against Brewster. Although the team came up short, Denholm pitched 3 shutout innings out of the pen, striking out a season-high seven batters. All in all, Denholm pitched 24.2 shutout innings (25.2 if you count the all-star game) striking out 36 batters in those frames. After getting drafted in the late rounds of the 2017 draft by the Boston Red Sox and not signing, Denholm was selected in the 14th round of the 2021 draft by the Cleveland Indians.