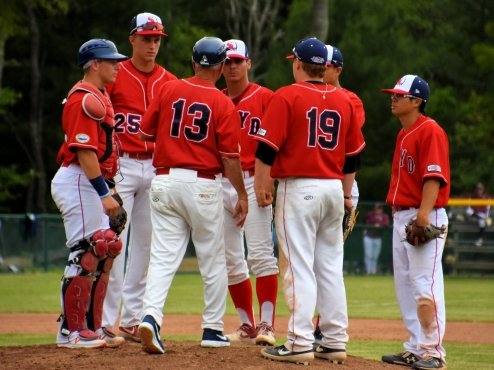 CHATHAM ? Three days after recording 14 hits and 10 runs in a commanding 10-3 victory against the Wareham Gatemen, the bats went quiet for the Yarmouth-Dennis Red Sox in a 7-3 loss to the Chatham Anglers at Veterans Field. The Red Sox showed heart all nine innings but ultimately couldn?t overcome 12 strikeouts, untimely hitting, and a few costly misplays in the field.

Despite Y-D?s lack of offense, they managed to get on the board early, capitalizing on an overthrow by the Chatham third baseman that allowed leadoff hitter Wyatt Young (Pepperdine) to get into scoring position. A couple of productive outs scored Young to give the Red Sox a 1-0 advantage in the top of the first inning. Still, the Red Sox had no answers for Chatham starter Kolby Kubichek (Texas), who walked just one batter and gave up no hits in four innings pitched.

Y-D got lucky in the bottom of the second inning, when a base-running hiccup prevented Chatham from tying the game. Keaton Rice (Bradley) hit a line shot into centerfield for the first hit of the night for either team, which was followed by a Jorge Arenas (Stetson) double to the right-center fence. Rice surely would have scored had he not hesitated, but the Chatham third base coach didn?t send him home, and Moore retired the next batter to get out of the inning unscathed.

Moore lost his command a little bit in the bottom of the third, giving a free base to Tyler Doanes (WVU). He retired the next two batters, but on a strike-three call to OGuinn, Doanes stole second. With two outs, Y-D shortstop Drew Swift ? who made a couple fantastic plays earlier in the game ? fumbled a slow grounder and then looked to pick Doanes off at third base, but the speedy Doanes had already darted home to make it a 1-1 ballgame.

Neither team crossed home plate again until the fifth inning, when the Chatham offense erupted for five runs on another error and three hits ? including a three-RBI triple ? off of losing pitcher Trevor Kniskern (Pepperdine).

The Red Sox had an aggressive approach at the plate all night but were no-hit until the top of the sixth inning, when Austin Wells (Arizona) singled through the 5-6 hole. The Y-D dugout temporarily came alive after that, as Jack Wold (UNLV) smoked a grounder passed Chatham?s first baseman that scored Young ? who led off the inning with a walk ? and cut the deficit to four runs.

The Y-D offense threatened again in the ninth, loading up the bases for R.J. Yeager (Mercer). With a 2-2 count, Yeager ripped a hard RBI grounder up the middle, but the Chatham second baseman was there to get the easy force at second for the second out of the inning. Ty Madden (Texas Austin) secured the 7-3 victory for the Anglers with his fourth strikeout in two innings to end the ballgame.

Chatham improved their record to 4-1, while Y-D will go into their doubleheader with the Cotuit Kettleers today with a 2-2 record. The first pitch is scheduled for 2 p.m. at Red Wilson Field.