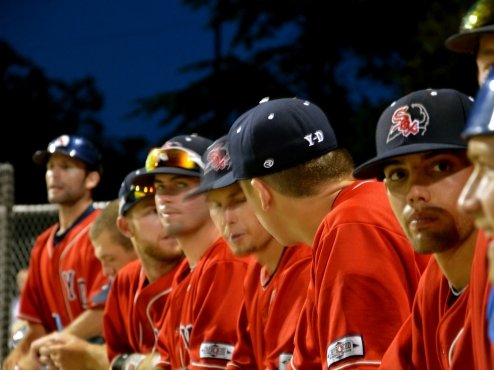 The Yarmouth Dennis Red Sox went quietly into the night Saturday, losing to the Falmouth Commodores 5-0 in a game in which Y-D managed only three hits against Falmouth pitching. The game was televised nationally on Fox College Sports.

Pitching for Falmouth, Brandon Magallones looked stellar en route to his first win of the season, pitching seven scoreless innings of one-hit ball with a walk and three strikeouts.??It wasn?t until a leadoff single by DH Robert Pehl in the bottom of the fifth that Y-D managed its lone hit off Magallones to break up the no-hitter (Magallones had previously walked Andrew Daniel in the third).

Falmouth got to Kevin McAvoy early, scoring two runs in the first on Dylan Davis? RBI single and a wild pitch. Coach Scott Pickler pulled his starter after two-plus innings of work, bringing in Jose Lopez for 3 2/3 innings of work.??But Lopez didn?t fare much better, and Falmouth tacked on two more runs, then another off reliever Jonathan Danielczyk, who gave up a solo shot to first baseman Casey Gillaspie in the seventh.

Still, Y-D couldn?t seem to get the offense into second gear.??A liner by shortstop Taylor White that should?ve made it through the infield was caught on a beautiful diving play by Kevin Newman in the fourth, good for a second out.??A one-out double by Kyle Wood in the eighth was wasted, as Falmouth reliever Donny Murray got Auston Bousfield to ground out and strike out Wayne Taylor.

Victoria Martin contributed to this report.