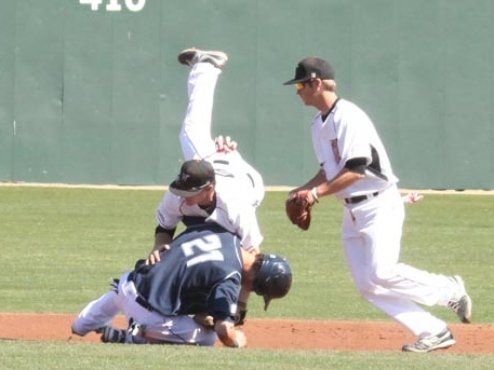 After suffering a tough loss to the Harwich Mariners on Thursday, the Yarmouth-Dennis Red Sox traveled to Stony Brook Field in Brewster to take on the Whitecaps. The Sox were looking to wake up the bats and show off their pitching skill and did just that.

Due to weather conditions, the Whitecaps were playing their first game of the season as well as their home opener.

The Sox wasted no time getting on base with outfielder Matt Honchel (Miami University (OH)) leading off with a single up the middle. This brought outfielder Auston Bousfield (University of Mississippi) to the plate. Bousfield grounded to Whitecap short stop, Chris Mariscal (Fresno State University) who threw the ball to first for the out, but allowed Honchel to advance to second. Jeffery Keller (Dartmouth College) was then walked by Whitecaps pitcher Frankie Vanderka (SUNY Stony Brook) to put runners on first and second.

After an infield fly from Sox first baseman Sal Annunziata (Seton Hall), designated hitter Robert Pehl (University of Washington) singled to right field allowing Honchel to score and Keller to move to third. Sox second baseman, Andrew Daniel (University of San Diego) stepped to the plate to try to bring more runs in. Pehl stole second putting him in scoring position for Daniel?s single to center field driving in two runs. The Sox would end the inning up 3-0 after Taylor White (University of Nevada, Las Vegas) lined out to first.

On the mound for the Sox was Sam Coonrod (Southern Illinois University) who started off the game strong by striking out Whitecaps left fielder Jordan Ebert (Auburn University) who would strike out once more to the dominant righty. Cole Lakford (Texas A&M) would record the first hit for the Whitecaps with a single up the middle. He would then advance to second thanks to a ground out from Kyle Overstreet (Alabama Tuscaloosa). Sox third baseman, White would earn his first of two errors of the day after he lost his footing fielding Tucker Tubbs? grounder. The error allowed Lankford to score putting Brewster on the board. Keaton Aldridge (University of Memphis) would hit a grounder to short for an easy out at first ending the inning.

The Sox maintained their lead throughout the game while demonstrating their skills at the plate. Tennessee Volunteer and Sox short stop, Taylor Smart recorded 2 hits in 3 at bats along with his teammate Daniel.

The sox scored once again in the top of the fifth after Whitecaps replaced Vanderka with Ben Meyer (University of Minnesota). Keller lead off the inning with a double down the left field line. Daniel singled up the middle allowing Keller to score from second. The half inning ended with the Sox leading 4-1.

The Sox would score yet again in the top of the sixth when a wild pitch from Meyer allowed Smart to score from third. Going into the bottom of the six, up 5-1, the Sox put in the right handed Clay Smith (St. Louis University) to relieve Coonrod. The Whitecaps had no trouble with Smith at first leading off with back-to-back singles. A wild pitch would put runners on second and third and a hit would allow one run to score. Smith made it out of the inning with the Sox still leading 5-2.

The Sox put another hit on the board in the top of the seventh. Smith would earn a pair of strikeouts in the bottom of the seventh after a single from Whitecaps second baseman, Connor Schaefbauer. The Whitecaps put in Justin Kamplain (Alabama Tuscaloosa) to pitch the rest of the game. Kamplain pitched a quick top of the eighth with a ground out, fly out and a strikeout from the Sox.

White earned his second error in the bottom of the eighth. However, a fielder?s choice and a double play would quickly retire the Whitecaps. The Sox struck out twice and flew out to right to quickly end the top of the ninth.

Jeremy Null (Western Carolina University) stepped on the mound for the Sox in the bottom of the ninth looking for his first save after his attempt in Harwich was washed out. The Whitecaps flew out and grounded out twice to end the inning and the game. The Sox would take the win 5-2 and put up 10 hits and 2 errors. The Whitecaps put up 9 hits and one error in the game.

The Sox are the only team in the league to have played three games and improve to 2-1 on the season. Y-D continues their road action tomorrow afternoon as they take on the Orleans Firebirds at 7 p.m. ET at Eldredge Park. Check our Twitter and Facebook pages for updates.