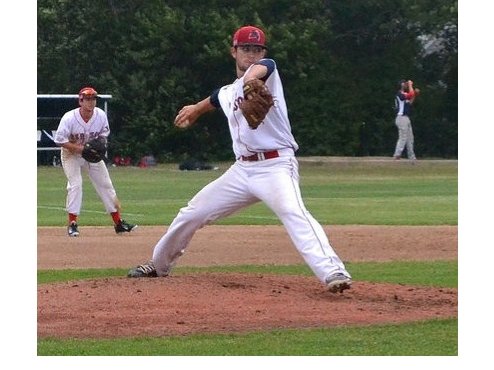 Yarmouth-Dennis starting pitcher Brandon Bailey was walking from the bullpen to the dugout carrying a full load. With a foam roller under his left arm, a flexible stretch bar in his right and a duffle bag around his back, Bailey was beginning the four-day recuperation process for his next start.

A native of Broomfield, Colorado, Bailey?s mental and physical preparation of his next start begins the day after his previous one. A tedious five-day regimen filled with stretching, long toss, going over opponent hitting charts with catcher Nathan Rodriguez and working on his form with pitching coach Matt Blake.

Success for starting pitchers at this level goes far beyond throwing well when your manager gives you the ball every fifth day. And while Bailey (0-2 / 6.75 ERA), entering his junior year at Gonzaga, doesn?t have a win to show for his meticulous preparation yet, he?s already won over his Cape League teammates and coaches.

His approach to pitching began taking form his freshman year on the Spokane, WA campus ? only a year removed from Tommy John surgery his senior season at Broomfield High School. Initially unable to blow his 93 miles-per-hour fastball past hitters like he would his junior year at Broomfield, where he posted a perfect 11-0 record with a microscopic 1.02 ERA. Bailey had to stop throwing and begin pitching.

It?s the chess match against opposing hitters ? the game within the game ? that Bailey thrives on. The level of excitement in his voice is evident just when talking about it.

?You have to be spot-on with your location, work hitters inside-outside. In that regard, I had to really spot-up my pitches. You can?t just throw an inside fastball ? it has to be down-and-in or elevated under the hitter?s hands. No matter the count, you have to be one pitch ahead,? Bailey said.

Those are just some of the adjustments Bailey has had to make in jumping from high school ball to the Division 1 collegiate level. Another was the heightened level of professionalism other players take at the plate against him, like opponent pitch recognition, for example.

In his third start in a Bulldogs uniform Bailey learned the hard way that he couldn?t win on stuff alone. Facing UC Irvine on March 9, 2014 in a 2-0 count ? a textbook fastball count ? Bailey threw a change-up right below the hitter?s kneecap; usually a pitcher?s pitch with the hopes of getting the hitter out in front of the pitch for a swinging strike.

That, however, was not the case.

The Anteater hitter instead sat back on the delivery, anticipating the off-speed pitch and hammered the ball off the wall for an extra-base hit. Puzzled, Bailey looked back at his catcher in disbelief.

As it turned out when Bailey would come set to this delivery, his right hand and glove was too far to the right of his hip ? allowing the UC Irvine first base coach to see every grip prior to the pitch. He took the loss that day, lasting only five innings while giving up six earned runs on nine hits.

That?s all a part of a pitcher?s growth and moving up the ranks for high school ball to the collegiate level. Should he want to continue climbing the corporate ladder, Bailey knows he?ll have to continue that growth.

A year-plus after that March 9 start against UC Irvine, Bailey has blossomed into a top of the rotation starter. In eight starts for the Zags this past season he went at least eight innings giving up two or fewer runs. His eight wins and 91 strikeouts through 96.2 innings were good for second and third in the West Coast Conference, respectively.

The 5-foot-10, 170-pounder?s cerebral approach to pitching and a bullish mentality on the bump is what caught the eye of manager Scott Pickler. Well that and his seven shut-out innings against second-ranked UCLA on May 2.

?[Machtolf] told me about Bailey. He said Bailey is a competitor [that] gets after hitters [and] he?s got some pitchability. That?s exactly what I?ve got from him. He prepares himself really well. The way he handles himself in between starts. He?s a great person and an even better competitor,? Pickler said.

Praise from Gonzaga manager Mark Machtolf and the stellar performance versus UCLA was enough for Pickler to name Bailey his Opening Day starter for Y-D against Chatham.

?All that came from beating UCLA this year ? and that just matches what his coach told me ? that he gets after hitters and he?s not afraid of the moment,? Pickler said. ?I thought he?d be the least intimidated of the moment to start Opening Day.?

Without a win to show for his progressions with Y-D, Bailey has been the victim of some tough-luck losses; a three-error game by his middle infield against Chatham on Opening Day, a questionable balk call against Orleans that forced in a go-ahead run, and a rainout in his best performance of the year last week against Bourne to name a few.

?That?s baseball,? Bailey summed up. ?You just have to go out and play your game and hope everything falls into place and keep going.?

It?s a necessity for a pitcher to have a short memory and a sense of humor. And despite his ability to recall location, pitch sequence, and batted ball placement of at-bats in amazing detail from nearly two years ago, he displays both qualities.

An avid movie buff, Bailey enjoys quoting Adam Sandler movies and cites the David Spade film The Benchwarmers as one of his all-time favorites. But his light-hearted taste in cinema doesn?t mean he has a light-hearted approach to his summer on Cape Cod. Among the list of goals he wished to accomplish while playing for Y-D is making the Cape League All-Star team.

?I didn?t just come here to be like ?Oh, I?ll play baseball on the Cape for the summer and make some pitches?. I?m trying to push myself to be the best I can be,? Bailey said.

With a self-described razor-sharp focus, Bailey is hoping to make a last-minute attempt to get the All-Star nod while working on his pitchability. Aside from playing in Wareham on All-Star night, he wants to hammer down a two-seam fastball ? a pitch he developed in that win against UCLA ? as well feeling comfortable going inside on hitters.

?I?ve been able to throw it and throw it effectively against lefties. The goal is to be able to work inside and outside on lefties and righties no matter the situation. I want to be able to recognize my movement and spot it up on any pitch.?

There?s no question that Bailey would love to have the numbers to back-up what he?s learned on Cape Cod thus far, but there is no denying the experience learned in dealing with adversity. Sometimes those lessons are unquantifiable by analytics or sabermetricians. His ability to keep the past in the past and focus on his next start is, however, easily seen ? if not measurable in its own right.

In the meantime, Bailey will to do what he?s been doing: preparing for his next start and using his razor-sharp focus to get one step closer to achieving his goals.