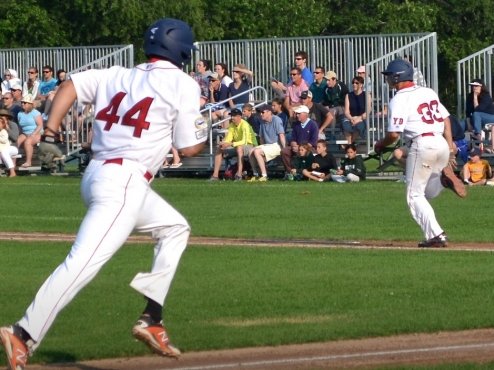 The Yarmouth-Dennis Red Sox (19-18) beat the Chatham Anglers (21-16) in shut out fashion on Friday at Red Wilson Field. The Red Sox got ahead early in the first inning and never looked back, ultimately winning 8-0.

The victory puts Y-D within two wins of the Anglers and Brewster Whitecaps (21-16). They stand three and a half games ahead of the Harwich Mariners (16-19) who are in last place in the East Division.

?We?re trying to play catch up here with Brewster and Chatham?We?re just trying to spread our lead over Harwich and we might be able to lap Chatham or Brewster. We?re kind of playing catch up. It?s good anytime you can beat a team that?s ahead of you in your division,? said starting pitcher Brandon Bailey (Gonzaga).

Bailey pitched six innings, struck out four batters, and only allowed four hits. This was just one of his many impressive starts that Bailey has delivered this season.

Despite his success, he is only 2-4 this season. When asked whether he thinks this accurately reflects how he has played this summer, he said, ?I don?t think it?s a very good reflection at all of how I?ve pitched. I feel like every time I?ve come out I?ve given my team a really good chance to win.?

While the Anglers struggled offensively, producing only four hits in nine innings, the Red Sox lineup exploded. Y-D put together 12 hits including five doubles and one home run.

Cole Billingsley (South Alabama) extended his on-base streak to 19 games and went 2-for-4 with a double and his first home run of the season.

He said, ?It felt really good (to get his first home run). It was nice to get it out of the way and it was a good all-around win. As a leadoff man, my approach is just to get on base any way I can for the team. That?s my job.?

Nathan Rodriguez (Arkansas) and Tommy Edman (Stanford) also had big games at the plate. They went 2-for-3 and 2-for-4 with a double, respectively.

Bailey was replaced in the seventh inning with reliever Ben Bowden (Vanderbilt) who has been extremely impressive and consistent since arriving to the Cape after his trip to the College World Series Finals. He pitched two innings before Dalton Lehnen (Cincinnati) pitched the ninth.

The Red Sox have five players who will represent Y-D in the Cape League All-Star Game at 6 p.m. on Saturday at Spillane Field in Wareham. The Red Sox will resume regular season action on Sunday against the Hyannis Harbor Hawks (19-17).