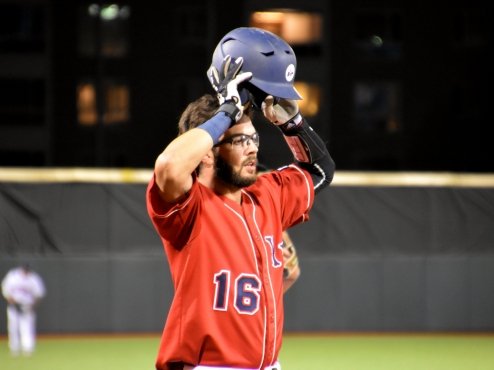 SOUTH YARMOUTH ? Behind stellar pitching and a high-powered offense led by Arizona phenom Austin Wells, the Yarmouth-Dennis Red Sox looked like a completely different team Sunday afternoon after being no-hit through six innings by the Chatham Anglers Saturday night in a 7-3 loss. The Red Sox poured in nine hits, drew six walks, and struck out just once in game one to secure a 7-2 victory against the Cotuit Kettleers. They recorded 11 hits in the nightcap, but a sloppy seventh inning by both teams resulted in a 9-9 tie ? the game was then called due to darkness.

The Kettleers came into game one with a 4-1 record and 36 runs, the most of any team in the Cape League at the time. However, it was the Red Sox offense that impressed the most. Wells went 4-7 on the day with three home runs, four runs scored, and six RBIs. The Pac-12 Freshman of the Year and three-time Freshman All-America First Team selection is now hitting .350 in 24 plate appearances for the Red Sox.

Y-D returners Noah Campbell (South Carolina Columbia) and Luke Waddell (Georgia Tech) made their summer debuts in game one yesterday, going 2-2 with an RBI and a walk, and 1-3 with a run and a walk, respectively.

The Y-D pitching staff had a game to celebrate as well. Boyd Vander Kooi (Arizona State) brilliantly painted the inside corner against Cotuit?s lefty-heavy lineup, giving up just three hits, three walks, and one earned run in four innings of work. Leadoff man Cameron Hill (Kentucky) drew a walk against Vander Kooi in the top of the first inning and came around to score on a productive out and an RBI blooper.

Still a 1-0 ballgame in favor of Cotuit, the Y-D offense came alive in the bottom of the second inning, recording five hits and three runs off of Cotuit starter Christopher Farrell (William & Mary). The Red Sox didn?t make good contact, but they hit the ball where the Cotuit defense wasn?t. Andrew Eyster (South Carolina Columbia), who came into game one with a .600 batting average, hit an infield single up the middle, followed by an infield single by Wells. With one out and runners on first and second, Jack-Thomas Wold (UNLV) hit a bleeder into center to juice the bases for Riley Tirotta (Dayton), who brought in a run on a fielder?s choice to shortstop. With two outs and runners on the corners, Campbell ? who hit nearly .400 last summer ? smoked a grounder past the Cotuit first baseman to put Y-D ahead 2-1. Erik Tolman (ASU) followed with an RBI double into the left-center gap to score another run, but the Kettleers got out of the inning when Campbell was thrown out at home trying to make it a 4-1 game.

Wells got his second hit of the game in the bottom of the third inning, when he hit a moonshot over the center field fence. However, Cotuit rallied in the top of the fourth inning, as Mason Dodd (Belmont Abbey) smoked a line drive into center field and came around to score when Camryn Williams? (Texas Austin) speed caused the Y-D shortstop to throw the ball away.

The Red Sox answered in the bottom of the fourth, as Wallace cued the ball just out of the Cotuit third baseman?s reach. Eyster then drew a walk off of Chris Troye (California Santa Barbara), who replaced Farrell. On an 0-2 pitch, Wells made it a 7-2 game as he hit his second home run of the day, this time over the right field fence.

The Y-D offense stayed hot in the nightcap, but the pitching wasn?t quite as sharp. Tirotta and Hall were the big producers in the game, as Tirotta went 2-3 with a run, an RBI, and a walk, while Hall went 2-4 with a run and an RBI. Wells hit his third home run of the day, this time a two-run bomb.

Despite giving up four solo shots, Y-D starter Jack Leftwich (Florida) had a solid outing, giving up just four hits, four earned runs, and one walk to go along with six strikeouts in five innings.

After a quiet first inning, the Red Sox got on the board after Wold hit a grounder just out of reach of the Cotuit third baseman. A pickoff attempt by Cotuit starting pitcher Chris Holcomb went awry, allowing Wold to get himself into scoring position for R.J. Yeager (Mercer), whose base hit allowed Wold to advance to third. Cotuit then brought in Casey Schmitt (SDSU), a Baseball America First Team Freshman All-American. With two outs and runners on the corners, Hall smoked a ground ball down the third baseline to score the first run of the ballgame.

Cotuit?s Donta Williams (Arizona) responded in the top of the third inning, hitting a no-doubter over the left field fence on the first pitch of the inning. Adam Oviedo (TCU) went yard in the very next at-bat, making it a 2-1 ballgame in favor of Cotuit.

The Y-D offense got to Schmitt in the bottom of the third inning, drawing two walks and scoring two runs on Wells? third home run of the day. The home run fest continued in the top of the fourth inning as Cotuit brought the game to a 3-3 tie on a solo shot.

The Red Sox erupted for four runs in the bottom of the fourth inning. Eric Bigani (UNLV) singled into right field, Hall smoked a line drive into center, and Waddell ripped an RBI single to left field to make it a 4-3 game. Eyster followed with a rocket line drive into center to score another run. The Red Sox made it a 6-3 game on another failed pickoff attempt, this time an error by the Cotuit third baseman. Tirotta then made it a 7-3 ballgame with a double into the right-center gap.

The Red Sox let the game slip away from them in the top of the seventh inning, as Matthews walked two batters. With two outs and two strikes, a Cotuit hitter smoked an RBI line drive into left-center, which was followed by an RBI bloop-single. Chase Smith (Pittsburgh) then replaced Matthews on the mound, but struggled to get the third out as well. With two outs and runners on one and two, Smith gave up a double down the left field line that made it an 8-7 ballgame in Cotuit?s favor. The game then got out of hand, as Smith walked a batter, hit a batter, and then threw a wild pitch that allowed Cotuit to score another run.

However, the Red Sox once again demonstrated grit as they fought back in the bottom of the seventh. Tirotta hit a shot into the right-center gap and hustled his way over to second base, just barely getting his hand in for a double to lead off the inning. Daylan Nanny (Western Carolina) drew a walk, Wyatt Young (Pepperdine) took a free base after getting drilled in the back by a pitch, and Jeffrey Costello (Northeastern) proved that good things happen if you put the ball into play when he hit a routine grounder to the Cotuit second baseman, who lost the ball in transition. The costly error made it a 9-9 game.

At the conclusion of the inning, the managers of both teams agreed to end in a tie. The 3-2-1 Red Sox are off today but will be back in action at Red Wilson Field Tuesday, when they take on the 3-3 Harwich Mariners at 5 p.m.