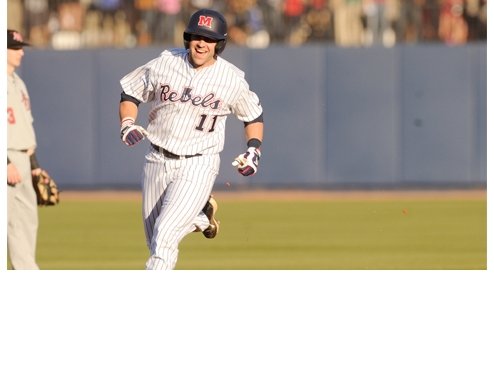 Auston Bousfield (Ole Miss) had Y-D?s first homerun of the season Sunday, but unfortunately it was not enough as the Chatham Anglers pulled away with an 8-5 victory. PHOTO: Ole Miss Athletics

It was Fathers? Day around the US and it was Sunday night baseball time in South Yarmouth, Cape Cod.? The Y-D Red Sox were back at home after a 3-game roadtrip where they finished with one win and two losses, but were looking to bounce back after a 3-0 defeat at Orleans on Saturday night and get back on the winning side against the Eastern Division Leaders, the Chatham Anglers.

The game featured two left-handed starting pitchers who looked to get their summers off to a great start.? And each of them did just that.? Rising Sophomore, Jordan Minch out of Purdue University, started on the hill for Y-D and was brilliant through 4 innings allowing no runs on two hits. Then the top of the 5th came around and after issuing a leadoff strikeout to Josh Eldridge (Old Dominion), he allowed two straight doubles to the eight and nine hitters in the Chatham?s order before being relieved from action by Head Coach Scott Pickler.? Minch finished off an incredible first outing this summer going 4 ? innings pitched, allowing four hits, two earned runs, on three walks and had one strikeout.

The bats really got going for both sides starting in the bottom of the 4th when the Red Sox took an early 1-0 lead. Sal Annunziata led off the inning with a leadoff double and came around to score after Jeff Keller (Dartmouth) hit a two-out double.

That was the last time that the Sox would lead in the ball game. The Anglers followed up the one-run bottom half of the 4th, with a five-run top of the fifth for themselves. This is where the Y-D pitching began to unravel a bit.? After Minch came out, the relievers couldn?t find the zone in order to get ahead of hitters, thus putting the Anglers into hitting counts, which led to 6 straight Anglers reaching base with 1 out, four of which reached via a base hit. They had 3 doubles, a single, and a bases loaded walk that helped them take the 5-1 lead in the top half of the 5th inning.

But when the Anglers bats woke up, so did the Red Sox bats.? The Sox answered back with two runs of their own in the bottom of the 5th.? It all started with a one-out single by Taylor Smart (Tennessee), followed by a fielder?s choice from T.J. White (UNLV).? Then a piece of timely hitting by Robert Pehl (Washington), with a 2-out Double, brought in White all the way from first base cutting into the Chatham lead at 5-2.? Then Sal Annunziata singled for his second hit of the ballgame, driving in Pehl at second, cutting the lead down to 5-3.? But Chatham was relentless.

Chatham was able to put up 3 more runs in the top of the 6th, in an inning quite like the top of the 5th.? Y-D had to battle out of a jam after Josh Eldridge led off with a walk, followed by another double from A.J. Murray (Georgia Tech), a single from Dante Flores (USC), a double from Blake Butera (Boston College) and then a walk issued to Mitchell Gunsolus (Gonzaga). All of this happened with nobody out.? Those hits brought around those three runs from Chatham before getting three straight outs to get out of the inning. Chatham now held an 8-3 lead after five and a half innings.

In the next two and a half innings both teams went down quietly.? Then the bottom of the 8th came around and this is when the bats came alive again for the Sox.? Annunziata led off with a bang bang play at first, where he was initially ruled out by the first base umpire. But after Coach Pickler came trotting over, asking for some help on the call, the first base umpire and home plate umpire conversed and overturned the call and Annunziata was then ruled safe. Annunziata would finish off an incredible day at the plate going 3 for 4.? After a strikeout by Andrew Daniel (USD), Auston Bousfield (Ole Miss) stepped up to the plate.? Bousfield hit the first homerun of the season for the Red Sox and only the third home run around the Cape thus far this summer.? This made the Chatham lead now 8-5 and that?s where it would end.

After two gruelingly long innings in the 5th and the 6th, the game was called by account of darkness.? Red Wilson Field does not have lights, and the umpires and coaches conversed and declared the game complete after the 8th inning.

This loss drops the Sox to 2-3 on the season.? They have an off-day tomorrow, but return to action on Tuesday to head to Cotuit to take on the Kettleers.? First pitch will be at 5:00 P.M. ET.? Check our Facebook and Twitter pages for updates on that game, as well as, a link to the Cotuit broadcast of the game.