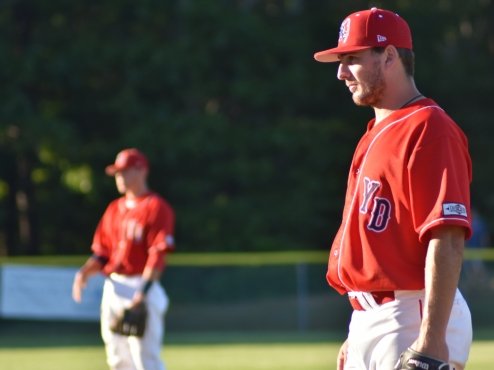 Take one glance at 6?3?, 225-lb Andrew Daschbach from Atherton, California (about a forty minute drive from San Francisco), and you might guess that he plays football or lacrosse, or even basketball, before you guess he plays baseball. Technically, you would not be wrong, but Daschbach has been a baseball player his entire life.

?He played whiffle ball in the backyard when he was three, four, five years old,? says Mark Daschbach, Andrew?s father, of Andrew?s love for the game. ?He basically loved all sports. I got him from home to the field and back and let him do his thing. He made his own choices and I was just there to support. I coached him a little bit then I gave up to the balance of the coaches he had.?

From a young age, Andrew was familiar with the grind of what it took to be an athlete at a high level.

?I had to get him up ? he played club baseball as a teenager ? and we?d get up six in the morning on a Saturday,? Mark Daschbach recounts. ?All his friends would be sleeping in and he?d be getting up, going down, and playing three baseball games on a Saturday, three on a Sunday, and never complained once about it.

?In little league, he really started to blossom in baseball. But he was an All-American football player in high school and also played basketball.?

Despite his dedication to baseball, Daschbach, now a rising junior at Stanford, did not specialize in a single sport until his freshman year of college. Throughout his youth, he played baseball, football, basketball, lacrosse, and golf. And though he now plays baseball for one of the premier NCAA Division I programs, he skipped out on varsity baseball his freshman year of high school.

?You know it?s funny, I actually chose to play lacrosse my freshman year of high school,? Daschbach recalls. ?I spent the whole year ? the whole spring ? playing lacrosse. I didn?t touch a baseball bat or glove and I just felt like something was missing. I had a great year in lacrosse ? I enjoyed it a lot ? but I didn?t quite feel at ease so that was a sign to me that it was time to come back and start swinging the lumber again.?

After Daschbach chose to move to baseball full-time in the spring he made the game look easy. He went on to earn numerous honors during the remainder of his high school career including the 2016 PAL Bay Player of the Year, 2016 Rawlings Perfect Game first-team all-region, 2016 Rawlings Perfect Game second-team All-American, and 2015 and 2016 San Mateo Daily Journal Male Athlete of the Year. And that?s just a fraction of the honors he picked up in high school.

Daschbach topped off an excellent high school baseball career by turning down an offer to play professionally after being drafted by the Tampa Bay Rays in the 40th round of the MLB Draft.

?It made more sense for me [to go to school instead of play professionally],? Daschbach says. ?I grew up about ten minutes from Stanford?s campus ? my dad went there ? I grew up going to games, so I spent a lot of time on the campus and really started to fall in love with it. I would have never been able to forgive myself if I had missed out on an opportunity to go where my heart was telling me to go.?

?It?s really cool,? the senior Daschbach says of his son playing at his alma mater. ?We would go watch Stanford baseball games growing up when he was four or five years old and he always dreamed of playing at Stanford. My dad, who passed away, wanted him to play at Stanford, and sure enough the dream came true.

Andrew Daschbach takes a very particular approach to the game of baseball, one that is not only necessary for long-term success in baseball, but one that is often highly sought after by scouts looking for players that can be resilient in the face of adversity.

?Putting the team before yourself makes it easy to play loose and be yourself,? Andrew says regarding his attitude toward the game. ?And if it doesn?t go your way then that?s fine. That?s the nice thing about playing out here; you get to come back and play the next day.?

?His greatest asset, in my opinion, is that he?s a great teammate, very supportive,? Mark says about the way Andrew carries himself on the field. ?Whether he?s having a good day or a bad day he?s always there for his teammates. It?s hard to teach that.?

Yarmouth-Dennis manager Scott Pickler received nothing but rave reviews about Daschbach prior to the summer, and that?s why he made the call to have Daschbach play with Y-D.

?I got three people that called me on him,? Pickler says. ?Rusty Filter told me about him, he used to be at Stanford. Mike Zirelli used to coach with me, and Ritchie Price all told me what a great person and what a great baseball player he is. So I had three people all give me the same recommendation. And the recommendation was: ?very good baseball player, unbelievable teammate, and a great personality, you want to be around this guy.?”

Nearly every time Daschbach comes up to the plate, makes a play at first base, or talks to any members of the media for an interview, his teammates can be seen, and more importantly heard, hooting and hollering for their teammate. Typically the bullpen can be found making all the noise and, more often than not, they speak and act like cavemen to ?emulate? Daschbach.

?I kind of have this meathead, caveman look about me,? Daschbach says, ?So these guys always joke with me about not speaking in full sentences.?

He plays right along with the joke, ensuring to keep a light atmosphere on the field and in the dugout.

?In having that lighthearted energy at the ballpark, I think that?s really important because this is a job interview for all of us and everybody understands that. But by showing up to the yard and playing loose and joking around and having a good time, it makes it easy for the guys to enjoy themselves and kind of play stress-free.?

The Stanford product said that he takes after former teammate Nico Hoerner, who was just drafted in the first round by the Chicago Cubs, in his approach.

?A big thing that [Nico] preached, and our whole staff back at Stanford [preached], was focus on the team winning and good things will come for you. I could take an 0-5 ? I had many o-fer nights playing at Stanford and the team won ? that?s a positive take away from the game. And if you have a great game and the team wins, that?s even better.?

Fortunately for Daschbach, he has not had many o-fer nights on the Cape this season. The everyday first baseman for Yarmouth-Dennis has reached base safely in each of the 12 games he has played in this season and has picked up a hit in all but two of them. Among all players in the CCBL this season with at least 10 plate appearances, Daschbach is first in on-base percentage (.510) and on-base plus slugging (1.159), and second in batting average (.378) and slugging percentage (.649). He also leads the league in HBP, with five.

Daschbach will be eligible for the draft in 2019 for the first time since his senior year of high school, and on his current trajectory, it seems extremely likely that he will be selected on one of the first two days of the draft.

?The idea of playing professionally has always been a goal of mine, so it?s fun to be just one step away from being able to pursue that,? he says about playing at the game?s next level. ?With that being said, I know how tough it is to make it to the major leagues so I?m just taking it day by day and trying to live in the moment now, not necessarily look forward to the future.?

Coach Pickler thinks Daschbach has what it takes to make it professionally.

?He?s got a chance, he?s definitely got a chance,? Pickler said. ?It?s his makeup. Everything about his makeup and his baseball ability ? he?s going to get a chance to play the game for a long time.?

Though Daschbach has been playing baseball for the majority of his life, he says he does not model his game after one particular player.

?Being a San Francisco guy, I love the Poseys of the world, I love Brandon Crawford ? homegrown guy. Guys like that,? Daschbach says when asked about if he attempts to emulate any big leaguers. He adds, ?It?s fun seeing Giancarlos and Aaron Judges hit all those home runs. I wouldn?t necessarily say I model my game after anybody but I enjoy being a student of the game.?

When he?s not playing, he can be found cooking or searching for food. Not unexpected from a 20-year-old.

?I?m definitely a foodie,? Andrew says, with a big smile on his face. ?So I really appreciate good food whether it?s me cooking it or going out and finding the best spots.?

?Anything, really,? he says. ?We?ve been cooking steaks back at the place. In high school I was a big chicken parmesan, chicken piccata guy. Trying to keep it relatively healthy, but taste is the number one priority.?

And in case you want to eat where Andrew does, you can head over to George?s Pizza in Harwich Port.

?I?ve gotten about half the menu so far and haven?t had a bad thing yet,? he says.

He has the rest of the summer to finish out the menu at George?s and accomplish the rest of what he?s set out to do this summer: win baseball games.

?I think in doing that, and focusing on winning, everybody will grow as players and their game will expand and their toolshed will grow. I think winning comes first and then after that you worry about growing as a player. But I think they work hand-in-hand.?