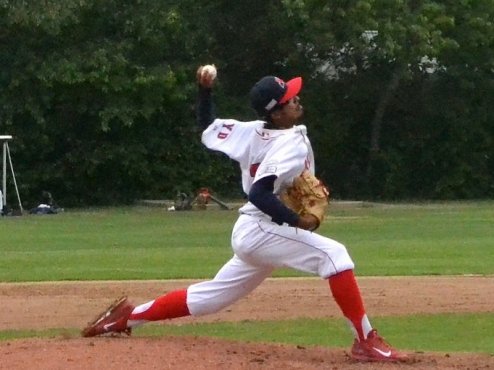 SOUTH YARMOUTH ? Prior to the start of the Cape League season, Yarmouth-Dennis manager Scott Pickler picked up the phone to speak to his former assistant coach at Cypress College, Mike Batesole ? now the head coach of the Fresno State Bulldogs.

?What do you got for me?? Pickler asked, trying to piece together his 2015 Red Sox rotation.

Batesole told him about a lanky 6-foot-1 freshman lefty with a solid three-pitch repertoire.

?This guy knows how to pitch and he competes. He?s not afraid of anything. He comes after hitters. He doesn?t get intimidated. He knows who he is,? Batesole told Pickler.

That?s all it took for Pickler to bring starter Ricky Thomas to Red Wilson Field.

And through five starts this season, Thomas, a San Diego native, has been nothing short of brilliant on the bump for Pickler. His five wins are tied for tops in the Cape League and boasts a microscopic 0.89 ERA ? good for third in the league among qualifying pitchers.

More intriguing than the results is how Thomas is getting those results. Without an over-powering fastball ? staying between 88-90 MPH ? Thomas relies on pitchability and complete command of his off-speed pitches to outwit opposing hitters at the plate.

With pin-point location on both sides of the plate, Thomas features a curveball that he shows more against lefties and a devastating change-up to pair with his fastball. While on the Cape, Thomas is also working on a two-seam fastball and a slider to beef up an already deep set of pitches, according to team pitching coach Matt Blake.

?The two-seamer is a nice pitch to work in on lefties or away from righties. The slider is getting close. I think it?s got a chance to be in the mix by the end of the season. [But] he?s predominantly worked with a three-pitch set with the change-up being his most signature pitch,? Blake said Friday.

The combination of his repertoire and a never-say-die mentality has earned himself a trip to Spillane Field in Wareham for the All-Star Game as well as high-praise from Pickler.

?It?s easier to call a game for Ricky than most guys because he can throw all three pitches for strikes,? Pickler said.

Despite showing some flash ? sporting Rick Vaughn-esque prescription Oakleys on the mound while pitching, Thomas has, by in large, flown under the radar across the league. While Orleans starter Mitchell Jordan has dominated the headlines with five wins of his own and not giving up an earned run to date, Thomas has stayed stride-for-stride with the flame-throwing Firebird without an over-the-top fastball.

Maybe he should lend those Oakley?s, or his fashion statement-making Gucci readers he wears off the mound, to those who over-looked Thomas? phenomenal start to the season.

?He doesn?t need to have [an over-powering fastball]. He knows how to pitch,? Pickler said. While Blake stated that because of the command of his off-speed stuff, Thomas?s fastball ?plays up more than what the radar indicates? and allows him to use his fastball in more traditional counts to ?sneak it by? hitters.

Thomas would love to emulate his favorite pitcher David Price ? and mechanically speaking, he does. But lacking a 95-plus heater, Thomas looks to other wily lefties when comparing his game to that of professionals in The Show.

Pickler has found success in the Cape League not by harboring a stable of pitchers who light up the radar gun, rather recruiting guys like Thomas who have the mental make-up to withstand facing All-Star caliber line-ups on a nightly basis.

?When I first started up here I always took guys who threw hard. They didn?t always know where it was going. That?s all they could do was throw hard. And they?d get beat up. But the guys who know how to pitch and not just throw are the ones who succeed here. I?m looking for a pitcher with a bulldog mentality.?

He found that and then some in Thomas, who?s entering his sophomore season with the Bulldogs.

Blake highlighted Pickler?s point calling him an ?ultra-competitor? who ?keeps himself in games?. ?Even when he scuffles around the strike zone early he still gives himself a chance to get through a lineup two or three times,? Blake, who trains everyone from high-profile high school pitchers to Cy Young winners like Corey Kluber in his Elite Pitching Performance company, said.

Thomas has at least one more start to prove he?s worthy of taking the ball for the East All-Stars next Saturday. That gives him plenty of time to run through his mental preparation of visualizing success ? even if his previous successes haven?t been noticed by those who aren?t paying close attention.