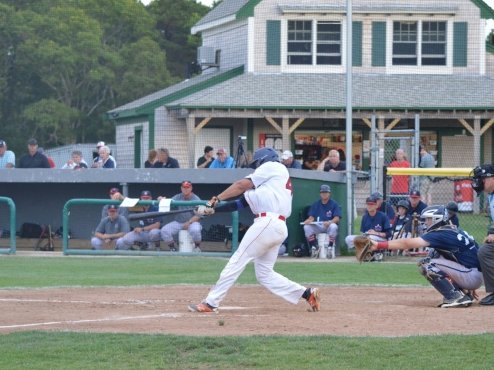 It has been 103 days since Gio Brusa put on a glove and made the long jog to his usual outfield position. Brusa was a staple in the University of Pacific lineup and a familiar face in the outfield but was limited to only 30 games in his junior season.

On April 7th Brusa started in right field as the Tigers traveled to play the Stanford Cardinals. His season would end before their next game against San Diego just three days later.

While Brusa is still not cleared to play in the field, he has compiled 76 at bats in 20games playing DH for the Yarmouth-Dennis Red Sox (17-15). He leads the Red Sox with five home runs and is tied for second in the Cape League.

?I?m doing my throwing program now and my arm is feeling really good. It was kind of a long process getting to 100 percent but it was worth it. My arm feels 100 percent it?s just, with this type of injury, you really got to take your time,? said Brusa.

Brusa said that he has not played designated hitter since high school but that it hasn?t changed his approach to the game or his role in the dugout. When asked about his new role as the DH he said, ?I?m loving it. I love being back in the batter?s box; I definitely missed that. It?s fun to swing the bat and try and help the team win.?

This is Gio Brusa?s second season in the Cape League, having played for the Brewster Whitecaps (16-14) last season. He was chosen as an All-Star, hit .322 on the season, and was ranked the 4th best prospect at the end of the summer.

When asked if he was nervous coming in with so many expectations despite not having playing in a game for 76 days before his first Cape League start, he said, ?I can definitely understand where that can come from. You have a good year the year before and you have an expectation of yourself to play the same way again. However, this situation was different because of my injury. Of course I want to produce but it was more important to get back into the swing of things. I knew it was going to be a struggle at the beginning but I?m just trying get my swing back.?

Just over two weeks ago, Brusa has struck out 13 times in his last 29 at bats. Despite early season struggles, Brusa has found his stride and isn?t focusing on anything except for getting back on the field and performing at a high level.

On Saturday morning Brusa was selected as an All-Star for the second year in a row and will be the starting designated hitter for the East Division. Before the selection was announced Brusa said, ?It would be a lot of fun (to participate in the day?s events). Whatever the opportunity is, I?ll be thankful that God gave it to me and it?ll be fun to go out and do what I can do.?

With Major League Baseball scouts looking at Brusa day in and day out, it is easy to see how an injury like this can make scouts hesitant. It has been over three months since Brusa?s injury and, although he says he is back to 100 percent, the scouts don?t see that because he still isn?t playing in the field.

When asked how he would sell himself to a scout who is worried about his long-term health, he said, ?I would say that you?ve seen what I can do. I want someone that truly believes in me and wants me not only at my best but also at my worst and is going to stick with me through tough times and success. If you?re going to put your chips on me then I?m going to be loyal and give you my best.?

Gio Brusa is looking forward to continuing his rehabilitation and representing the Y-D Red Sox at the All-Star Game at Spillane Field in Wareham on July 23rd. He wants to contribute in every way he can to help the Sox win but he will continue to DH so he can focus on staying healthy for his senior season at the University of Pacific.

?My coach back at school really doesn?t want me to rush it so that when I get back to school my injury isn?t a problem for next season,? said Brusa.