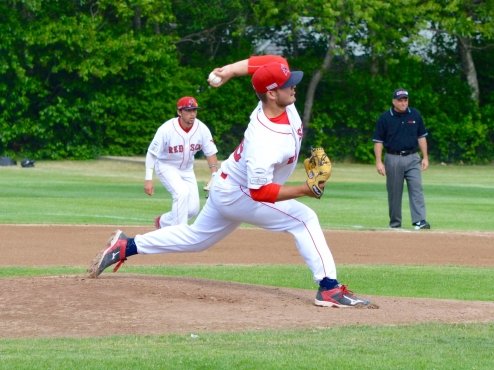 SOUTH YARMOUTH ? Prior to the start of the game, starting LHP Brett Adcock (Michigan) was loose ? joking around with teammates and personnel at the top of the dugout.

By the time he took the mound against the Falmouth Commodores (6-9), however, Adcock was all business ? combining with RHP Alec Eisenberg (Hofstra) to shut out the Falmouth bats, 2-0, Wednesday from Red Wilson Field.

This is the third-straight win for the Red Sox (6-8) after their against the Bourne Braves on Tuesday was called due to rain in the top of the fifth inning trailing, 1-0.

The two pitchers struck out 10 Falmouth batters while allowing four baserunners ? only one of which reached third base.

Red Sox manager Scott Pickler said in order for Adcock (1-2) to be successful he?d have to be consistent in the strike zone, and he was exactly that. Through six innings of work the Michigan product threw 84 pitches, 56 for strikes and retired 10 of the first 12 Commodores he faced. It was his longest outing of the year.

Catcher Nathan Rodriguez (Arkansas) got the Red Sox on the scoreboard in the bottom of the second with an RBI groundout to third, scoring Arkansas teammate Luke Bonfield who walked to lead off the inning.

That was all they needed behind Adcock and Eisenberg.

The Commodores looked to be threatening in the top of the fourth after a one-out single by Falmouth right fielder Heath Quinn and a two-out double by first baseman J.J. Matijevic had two runners in scoring position. Adcock then showed he could field his position by recording the final out of the inning to thwart any attempt at a Falmouth comeback.

An inning later Adcock walked the number nine hitter, Andrew Snow, with one out on eight pitches. He then worked the count full to lead-off man Tate Blackman. With Snow advancing on the pitch, Rodriguez framed the strike three call from home plate umpire Steve Williams and still had time to throw out the runner at second base to end the top of the fifth.

He worked a one-two-three sixth inning before handing it over to the bullpen.

Third baseman Connor Wong (Houston) tacked on an extra run in the bottom of the sixth with a sacrifice fly to center, plating Bonfield who laced a lead-off double down the left field line and advanced to third on a wild pitch.

Eisenberg, embracing his role in the bullpen, came in for the final three innings of work and shut the door. He struck out six of the nine batters he faced and never found himself in a three-ball count. He needed only 32 pitches (24 strikes) over a perfect three innings to record his first save of the year.

The Red Sox will next visit East Division rival Harwich at Whitehouse Field on Friday as they look to extend their three-game winning streak and notch their first division win on the season. First pitch is scheduled for 6:30 p.m.