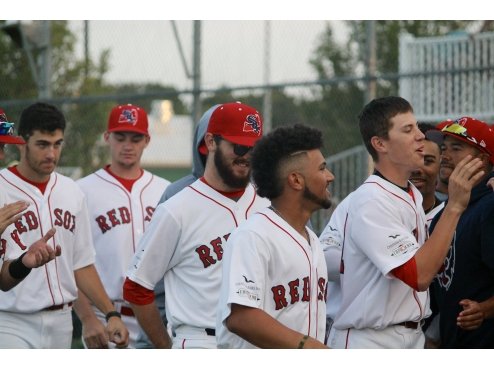 rn By Lance ReynoldsrnrnWell, Y-D Red Sox fans, whether you can believe it or not, we are officially at the midway point of the 2017 CCBL season. It certainly has been a roller coaster of a first half for the three-time defending league champion Red Sox.rnrn?rnrnThere have been a handful of moments where it seems like the Sox are destined for a four-peat, while there also have been moments where it appears that it?s just not Y-D?s year of glory.rnrn?rnrnIn the next 22 games and hopefully more, the fate of the 2017 edition of the Y-D Red Sox will be revealed.rnrn?rnrnWith the conclusion of Saturday?s 9-5 loss against the Chatham Anglers at Red Wilson Field, here are some highlights of the first 22 games of the summer:rnrnThe Red Sox posted a strong 7-2-1 record through the first 10 games of the season and were in first place of the Eastern Division for the majority of June.rnrn?rnrnPerhaps the most thrilling of those seven wins was when Y-D mounted an improbable come-from-behind victory against the Chatham Anglers by scoring nine runs in the bottom of the eighth for an 11-8 win at Red Wilson Field on June 21.rnrn?rnrnFour days after that June 21 win, the Red Sox exploded for a season-high 14 runs in a 14-3 victory in game one of a doubleheader against the Falmouth Commodores on June 25.rnrn?rnrnY-D?s bats stayed hot on June 28 when they registered 12 runs on a season-high 18 hits in a 12-1 win over the Harwich Mariners at Whitehouse Field.rnrn?rnrnThe longest winning streak during the first half was three.rnrn?rnrnJuly has not been too kind for the Red Sox offense as they have dropped four of six games to date in the month, including being shutout in three straight 4-0 defeats spanning July 2 – July 4.rnrn?rnrnWhen second baseman Nico Hoerner scored on a passed ball in the fifth inning of a 3-1 win at Hyannis on July 5, it marked the first Y-D run since the eighth inning of a 7-4 win at Brewster on July 1 – a stretch of 32 scoreless innings.rnrn?rnrnSpeaking of Hoerner, he is perhaps the team?s best all-around hitter. Usually hitting out of the lead off or second-spot of the Red Sox lineup, Hoerner posts a .308 batting average to go along with being tied for first with outfielder Alex McKenna with six doubles. The second baseman from Stanford has hit three homers and driven in 12 runs.rnrn?rnrnMcKenna, who is usually positioned in center or right field, collected an eight-game hitting streak spanning June 27 – July 3.rnrn?rnrnUtility infielder Christian Koss carries a team-high .382 batting average into the second half of the season.rnrn?rnrnArizona-product and third baseman Nick Quintana has hit four home runs – a team high.rnrn?rnrnStarting pitcher Tim Brennan was named CCBL pitcher of the week for the third week of the season with his seven-inning 10-strikeout performance in Y-D?s 12-1 win at Harwich on June 28.rnrn?rnrnStarting pitcher Kris Bubic has been impressive on the mound for the Red Sox. Bubic has recorded a 2.18 ERA while picking up two wins in the three games he has started. He is second on the team in strikeouts with 20.rnrn?rnrnCloser Riley McCauley has converted six saves in his eight appearances to date this season.rnrnY-D sits at 11-10-1 and are tied with the Brewster Whitecaps for second in the Eastern Division of the CCBL. The Red Sox start up the second half of the season Sunday in Wareham against the the Gatemen with a 5:30 first pitch. ?rnrn?rn