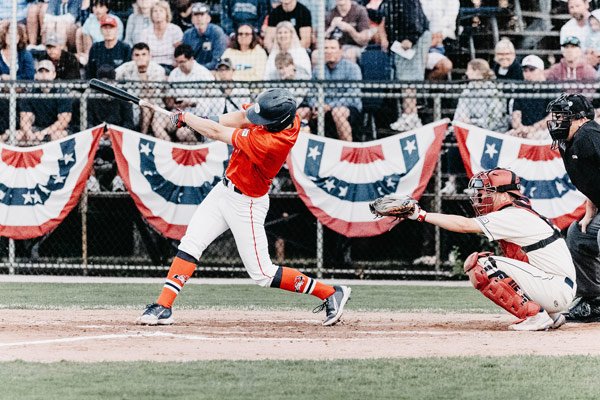 After splitting the first two meetings at Whitehouse Field in Harwich, the Y-D Red Sox dropped the rubber match, losing 5-3 to the Mariners on Thursday night.

Y-D (12-8-3) got on the board fast, with Luke Shliger scoring on a Chase Meidroth sacrifice fly just three batters into the game. Shliger drew a leadoff walk, stole second, and advanced to third on a wild pitch to set himself just 90 feet from home.

On the mound, Drew Dowd was on cruise control his first time through the lineup. Making his summer debut, Dowd retired eight of the first nine batters he faced, erasing the sole base runner by following the two-out walk in the first with a strikeout.

With two outs in the third, however, Dowd gave up back-to-back doubles to Nick Goodwin and Chris Newell, allowing the tying run to score.

“Just two fastballs that caught too much plate, and that’ll happen,” Dowd said. “There’s a lot of good hitters out here, just is what it is. I’ll learn.”

Y-D Field Manager Scott Pickler elected to go to the pen. Despite just being in the third inning, Dowd was on a pitch count and was already at 48 pitches.

“Didn’t go as long in the game as I wanted to, but it was what it was,” Dowd said. It was good to get out there for the first time, get a little rust off… looking forward to the next time I go out there.”

Matt Kavanaugh came in and got the final out of the third, but gave up two runs in both the fourth and fifth inning, including a two-run home run to Goodwin.

Offensively, the Sox struggled after scoring in the first. They were held hitless through four, and up until the seventh inning, their only hit was a Jordan Thompson double in the fifth. Thompson was promptly stranded on second a few pitches later.

The Sox sticks showed signs of life in the seventh, however. After a one-out single by Mike Boeve, Caden Connor reached on a throwing error by David Smith, whose throw to second was wide of the base, allowing Boeve to reach second.

Drew Bowser and Thompson followed up with back-to-back singles, and Jonny Long drew a walk after pinch-hitting.

With still just one out and the tying run in scoring position, the Sox had a great chance to at least tie the game. With Homer Bush Jr. pinch-running for Long, the speed at first also meant a ball in the gap or down the line would give Y-D the lead.

Instead, Harwich reliever Danny Wilkinson came in and struck out both Shliger and Hunter Haas to retire the side. Y-D didn’t get another runner on base the rest of the way.

The Y-D offense hasn’t regressed to the level it was at to begin the season, but the bats have been sluggish over the last week or so. Over the last five games, they have scored just 16 runs, going 1-3-1 in that stretch.

Their lead in the East division has shrunk, as they are now just one point ahead of Brewster after the Whitecaps beat Chatham on Thursday night at Veterans Field.

Y-D will get an immediate shot at revenge tomorrow as they welcome the Mariners to Red Wilson Field. Grant Taylor will make his fourth start of the summer. First pitch is set for 5 p.m.